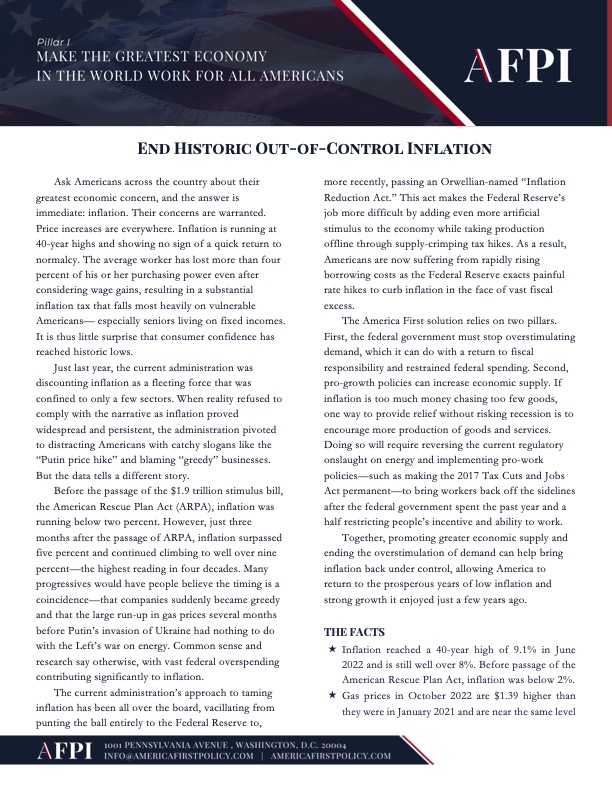 Ask Americans across the country about their greatest economic concern, and the answer is immediate: inflation. Their concerns are warranted. Price increases are everywhere. Inflation is running at 40-year highs and showing no sign of a quick return to normalcy. The average worker has lost more than four percent of his or her purchasing power even after considering wage gains, resulting in a substantial inflation tax that falls most heavily on vulnerable Americans—especially seniors living on fixed incomes. It is thus little surprise that consumer confidence has reached historic lows.

Just last year, the current administration was discounting inflation as a fleeting force that was confined to only a few sectors. When reality refused to comply with the narrative as inflation proved widespread and persistent, the administration pivoted to distracting Americans with catchy slogans like the “Putin price hike” and blaming “greedy” businesses. But the data tells a different story.

Before the passage of the $1.9 trillion stimulus bill, the American Rescue Plan Act (ARPA), inflation was running below two percent. However, just three months after the passage of ARPA, inflation surpassed five percent and continued climbing to well over nine percent—the highest reading in four decades. Many progressives would have people believe the timing is a coincidence—that companies suddenly became greedy and that the large run-up in gas prices several months before Putin’s invasion of Ukraine had nothing to do with the Left’s war on energy. Common sense and research say otherwise, with vast federal overspending contributing significantly to inflation.

The current administration’s approach to taming inflation has been all over the board, vacillating from punting the ball entirely to the Federal Reserve to, more recently, passing an Orwellian-named “Inflation Reduction Act.” This act makes the Federal Reserve’s job more difficult by adding even more artificial stimulus to the economy while taking production offline through supply-crimping tax hikes. As a result, Americans are now suffering from rapidly rising borrowing costs as the Federal Reserve exacts painful rate hikes to curb inflation in the face of vast fiscal excess.

The America First solution relies on two pillars. First, the federal government must stop overstimulating demand, which it can do with a return to fiscal responsibility and restrained federal spending. Second, pro-growth policies can increase economic supply. If inflation is too much money chasing too few goods, one way to provide relief without risking recession is to encourage more production of goods and services. Doing so will require reversing the current regulatory onslaught on energy and implementing pro-work policies—such as making the 2017 Tax Cuts and Jobs Act permanent—to bring workers back off the sidelines after the federal government spent the past year and a half restricting people’s incentive and ability to work.

Together, promoting greater economic supply and ending the overstimulation of demand can help bring inflation back under control, allowing America to return to the prosperous years of low inflation and strong growth it enjoyed just a few years ago.

As Summer Begins, No Relief Yet from the Biden Price Hike and Inflation Tax, America First Policy Institute (June 2022).

President Biden’s Infrastructure and Build Back Better Plans: An Antidote for Inflationary Pressure by Jared Bernstein and Ernie Tedeschi, The White House (Aug. 2021).

Why is U.S. Inflation Higher than in Other Countries?, Federal Reserve Bank of San Francisco (March 2022).