Pillar IV: Give Parents More Control Over the Education of Their Children 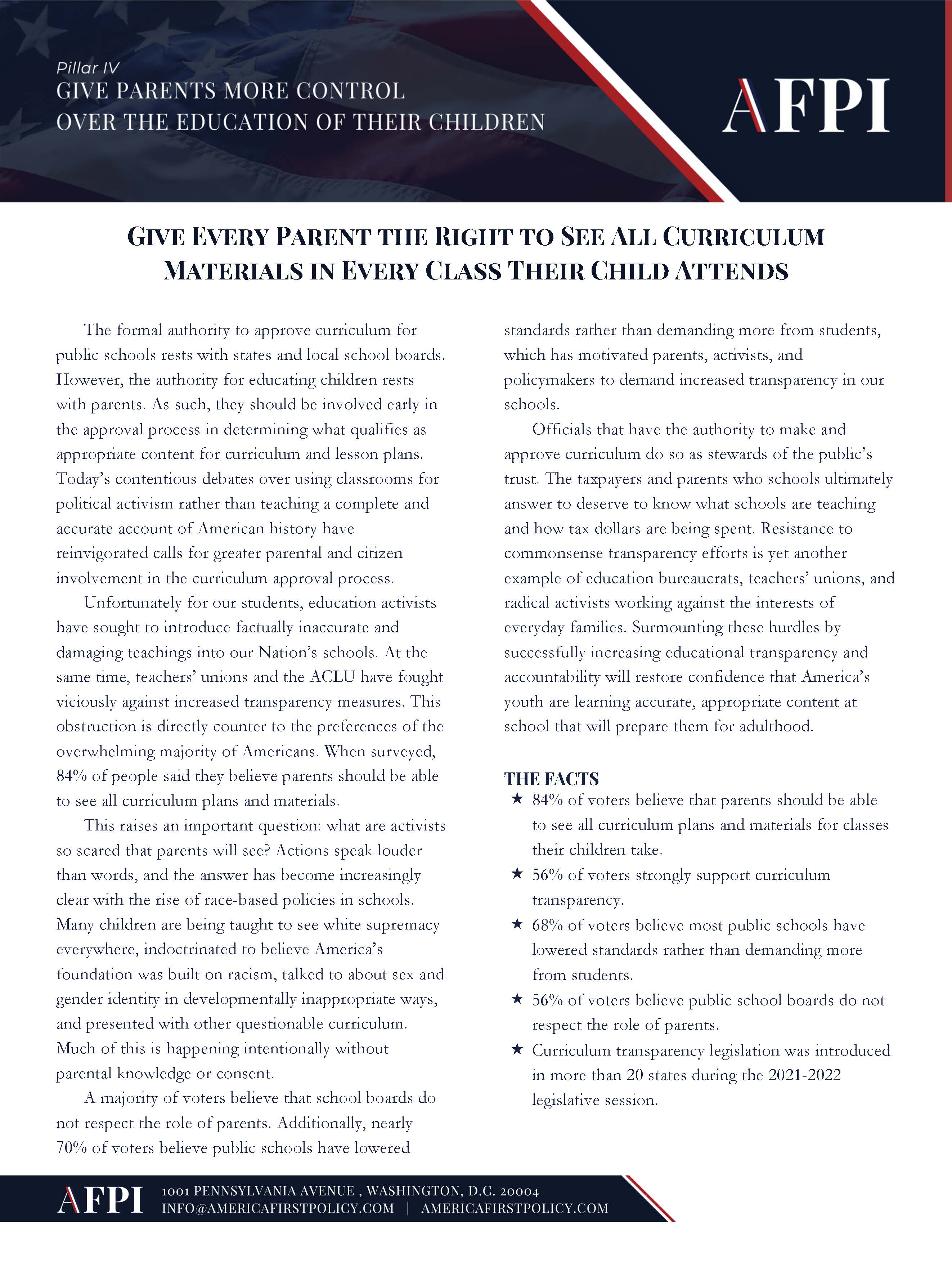 The formal authority to approve curriculum for public schools rests with states and local school boards. However, the authority for educating children rests with parents. As such, they should be involved early in the approval process in determining what qualifies as appropriate content for curriculum and lesson plans. Today’s contentious debates over using classrooms for political activism rather than teaching a complete and accurate account of American history have reinvigorated calls for greater parental and citizen involvement in the curriculum approval process.

Unfortunately for our students, education activists have sought to introduce factually inaccurate and damaging teachings into our Nation’s schools. At the same time, teachers’ unions and the ACLU have fought viciously against increased transparency measures. This obstruction is directly counter to the preferences of the overwhelming majority of Americans. When surveyed, 84% of people said they believe parents should be able to see all curriculum plans and materials.

This raises an important question: what are activists so scared that parents will see? Actions speak louder than words, and the answer has become increasingly clear with the rise of race-based policies in schools. Many children are being taught to see white supremacy everywhere, indoctrinated to believe America’s foundation was built on racism, talked to about sex and gender identity in developmentally inappropriate ways, and presented with other questionable curriculum. Much of this is happening intentionally without parental knowledge or consent.

A majority of voters believe that school boards do not respect the role of parents. Additionally, nearly 70% of voters believe public schools have lowered standards rather than demanding more from students, which has motivated parents, activists, and policymakers to demand increased transparency in our schools.

Officials that have the authority to make and approve curriculum do so as stewards of the public’s trust. The taxpayers and parents who schools ultimately answer to deserve to know what schools are teaching and how tax dollars are being spent. Resistance to commonsense transparency efforts is yet another example of education bureaucrats, teachers’ unions, and radical activists working against the interests of everyday families. Surmounting these hurdles by successfully increasing educational transparency and accountability will restore confidence that America’s youth are learning accurate, appropriate content at school that will prepare them for adulthood.

84% Believe Parents Should Be Able To See All Curriculum Plans and Materials by Scott Rasmussen, ScottRasmussen.com (Feb. 2022).

Keep Politics Out of the Classroom with Academic Transparency, Goldwater Institute.