Pillar II: Put Patients and Doctors Back in Charge of Healthcare 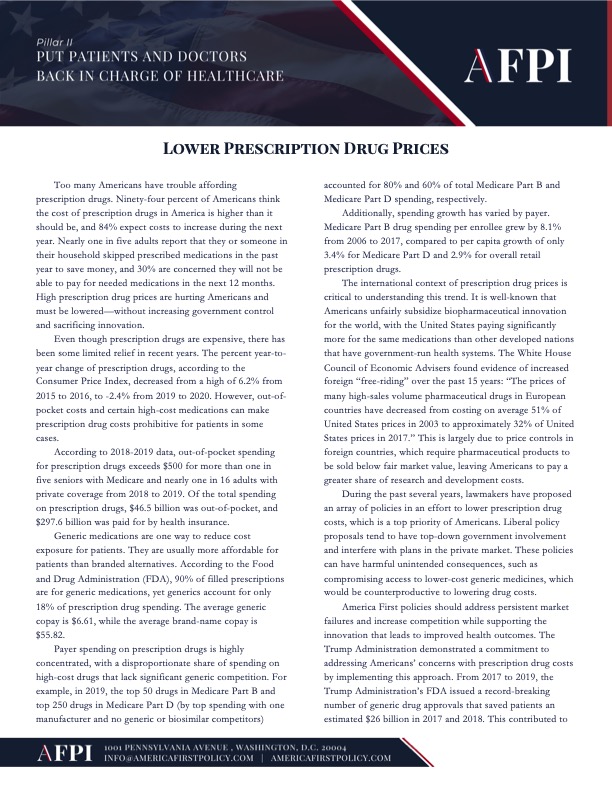 Too many Americans have trouble affording prescription drugs. Ninety-four percent of Americans think the cost of prescription drugs in America is higher than it should be, and 84% expect costs to increase during the next year. Nearly one in five adults report that they or someone in their household skipped prescribed medications in the past year to save money, and 30% are concerned they will not be able to pay for needed medications in the next 12 months. High prescription drug prices are hurting Americans and must be lowered—without increasing government control and sacrificing innovation.

Even though prescription drugs are expensive, there has been some limited relief in recent years. The percent year-to-year change of prescription drugs, according to the Consumer Price Index, decreased from a high of 6.2% from 2015 to 2016, to -2.4% from 2019 to 2020. However, out-of- pocket costs and certain high-cost medications can make prescription drug costs prohibitive for patients in some cases.

Generic medications are one way to reduce cost exposure for patients. They are usually more affordable for patients than branded alternatives. According to the Food and Drug Administration (FDA), 90% of filled prescriptions are for generic medications, yet generics account for only 18% of prescription drug spending. The average generic copay is $6.61, while the average brand-name copay is $55.82.

Additionally, spending growth has varied by payer. Medicare Part B drug spending per enrollee grew by 8.1% from 2006 to 2017, compared to per capita growth of only 3.4% for Medicare Part D and 2.9% for overall retail prescription drugs.

The international context of prescription drug prices is critical to understanding this trend. It is well-known that Americans unfairly subsidize biopharmaceutical innovation for the world, with the United States paying significantly more for the same medications than other developed nations that have government-run health systems. The White House Council of Economic Advisers found evidence of increased foreign “free-riding” over the past 15 years: “The prices of many high-sales volume pharmaceutical drugs in European countries have decreased from costing on average 51% of United States prices in 2003 to approximately 32% of United States prices in 2017.” This is largely due to price controls in foreign countries, which require pharmaceutical products to be sold below fair market value, leaving Americans to pay a greater share of research and development costs.

During the past several years, lawmakers have proposed an array of policies in an effort to lower prescription drug costs, which is a top priority of Americans. Liberal policy proposals tend to have top-down government involvement and interfere with plans in the private market. These policies can have harmful unintended consequences, such as compromising access to lower-cost generic medicines, which would be counterproductive to lowering drug costs.

America First policies should address persistent market failures and increase competition while supporting the innovation that leads to improved health outcomes. The Trump Administration demonstrated a commitment to addressing Americans’ concerns with prescription drug costs by implementing this approach. From 2017 to 2019, the Trump Administration’s FDA issued a record-breaking number of generic drug approvals that saved patients an estimated $26 billion in 2017 and 2018. This contributed to the 2.4% annual price decrease in 2019 and marked the largest annual price decrease in nearly 50 years.

Other policies enacted between 2017 and 2021 sought to end “free-riding” in the global market and provide discounted access to lifesaving drugs such as insulin and epinephrine to uninsured patients. Additional policies sought to end kickbacks to middlemen to ensure patients directly receive the benefit of discounts, allow the importation of prescription drugs from Canada to lower costs, and end gag clauses, thus allowing pharmacists to inform patients of the best prices for needed medications. Not all of the policies were implemented, due to court proceedings and the different approaches of the Biden Administration. Nonetheless, creating and implementing America First policies should remain a priority.

The problem of foreign “free-riding” by other developed countries also requires serious attention. Our country should develop a new trade policy that would create economic disincentives for specific developed countries to pay less than market value for prescription drugs. The FDA can also implement innovative policies to appropriately switch prescription-only medications to available over-the- counter drugs to increase access and lower costs for patients.

States can also work to address high prescription drug costs by implementing policies for greater transparency into the practices of manufacturers, pharmacy benefit managers, and insurers. Since 2016, 14 states have passed prescription drug price transparency legislation. States can also provide savings for uninsured individuals by allowing them to buy prescription drugs at post-rebate prices plus an administrative fee. Texas passed a law creating this type of savings program in 2021. Further, states can evaluate establishing a prescription drug importation program. Florida has developed a program that is awaiting FDA approval and expects to save $150 million in the first year alone.

Additionally, states can implement policies that give patients greater control of their prescriptions by requiring pharmacies to transfer the prescription when requested by the patient. This policy would build on the Trump Administration’s 2020 rule to increase medical record interoperability and facilitate consumer shopping. States can also remove restrictions on physician dispensing of prescription drugs in settings such as direct care practices.

Health Policy (Jan. 2022).
Economic Report of the President, Chapter 4 by Council of Economic

Advisers, Executive Office of the President (Jan. 2021). Empower Patients: Let Them Own and Control Their Prescriptions,

Council of Economic Advisers, Executive Office of the President

The Use of Medicines in the U.S., IQVIA Institute (May 2021).
The U.S. Generic and Biosimilar Medicines Savings Report, Association. for Accessible Medicines (Oct. 2021).