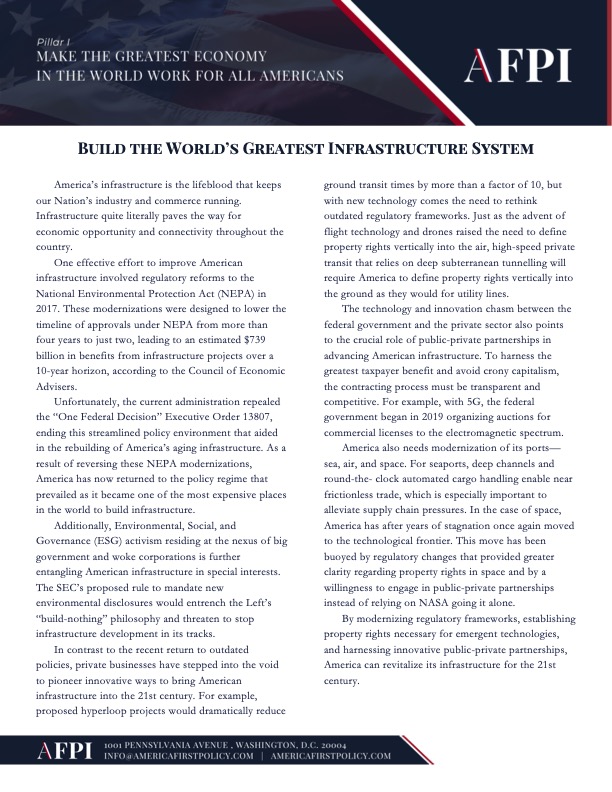 America’s infrastructure is the lifeblood that keeps our Nation’s industry and commerce running. Infrastructure quite literally paves the way for economic opportunity and connectivity throughout the country.

One effective effort to improve American infrastructure involved regulatory reforms to the National Environmental Protection Act (NEPA) in 2017. These modernizations were designed to lower the timeline of approvals under NEPA from more than four years to just two, leading to an estimated $739 billion in benefits from infrastructure projects over a 10-year horizon, according to the Council of Economic Advisers.

Unfortunately, the current administration repealed the “One Federal Decision” Executive Order 13807, ending this streamlined policy environment that aided in the rebuilding of America’s aging infrastructure. As a result of reversing these NEPA modernizations, America has now returned to the policy regime that prevailed as it became one of the most expensive places in the world to build infrastructure.

Additionally, Environmental, Social, and Governance (ESG) activism residing at the nexus of big government
and woke corporations is further entangling American infrastructure in special interests. The SEC’s proposed rule to mandate new environmental disclosures would entrench the Left’s “build-nothing” philosophy and threaten to stop infrastructure development in its tracks.

In contrast to the recent return to outdated policies, private businesses have stepped into the void to pioneer innovative ways to bring American infrastructure into the 21st century. For example, proposed hyperloop projects would dramatically reduce ground transit times by more than a factor of 10, but with new technology comes the need to rethink outdated regulatory frameworks. Just as the advent of flight technology and drones raised the need to define property rights vertically into the air, high-speed private transit that relies on deep subterranean tunnelling will require America to define property rights vertically into the ground as they would for utility lines.

The technology and innovation chasm between the federal government and the private sector also points to the crucial role of public-private partnerships in advancing American infrastructure. To harness the greatest taxpayer benefit and avoid crony capitalism, the contracting process must be transparent and competitive. For example, with 5G, the federal government began in 2019 organizing auctions for commercial licenses to the electromagnetic spectrum.

America also needs modernization of its ports—sea, air, and space. For seaports, deep channels and round-the- clock automated cargo handling enable near frictionless trade, which is especially important to alleviate supply chain pressures. In the case of space, America has after years of stagnation once again moved to the technological frontier. This move has been buoyed by regulatory changes that provided greater clarity regarding property rights in space and by a willingness to engage in public-private partnerships instead of relying on NASA going it alone.

Establishing Discipline and Accountability in the Environmental Review and Permitting Process for Infrastructure Projects, Executive Office of the President (Aug. 2017).

Time to Repeal the Obsolete National Environmental Policy Act (NEPA) by Diane Katz, The Heritage Foundation (March 2018). What is driving up the cost of highway construction? by Manny Prunty and David Wessel, Brookings (July 2019).