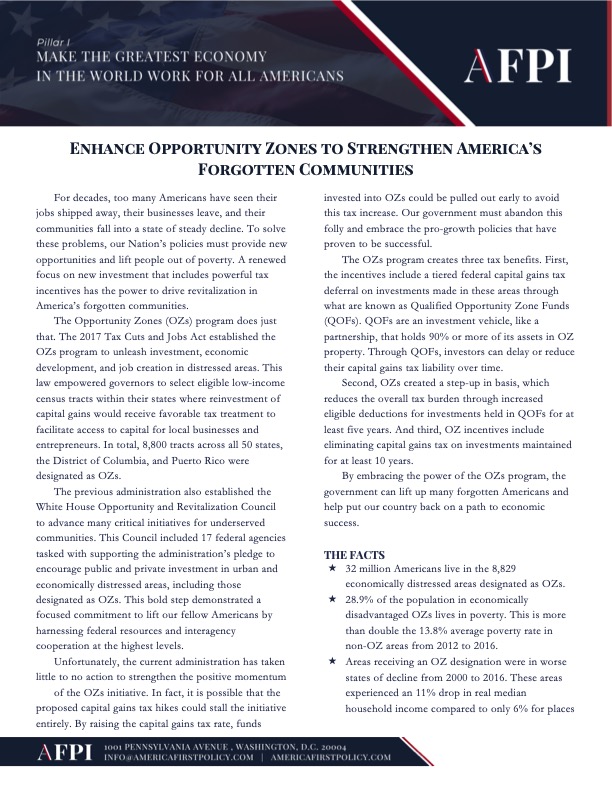 For decades, too many Americans have seen their jobs shipped away, their businesses leave, and their communities fall into a state of steady decline. To solve these problems, our Nation’s policies must provide new opportunities and lift people out of poverty. A renewed focus on new investment that includes powerful tax incentives has the power to drive revitalization in America’s forgotten communities.

The Opportunity Zones (OZs) program does just that. The 2017 Tax Cuts and Jobs Act established the OZs program to unleash investment, economic development, and job creation in distressed areas. This law empowered governors to select eligible low-income census tracts within their states where reinvestment of capital gains would receive favorable tax treatment to facilitate access to capital for local businesses and entrepreneurs. In total, 8,800 tracts across all 50 states, the District of Columbia, and Puerto Rico were designated as OZs.

The previous administration also established the White House Opportunity and Revitalization Council to advance many critical initiatives for underserved communities. This Council included 17 federal agencies tasked with supporting the administration’s pledge to encourage public and private investment in urban and economically distressed areas, including those designated as OZs. This bold step demonstrated a focused commitment to lift our fellow Americans by harnessing federal resources and interagency cooperation at the highest levels.

Unfortunately, the current administration has taken little to no action to strengthen the positive momentum of the OZs initiative. In fact, it is possible that the proposed capital gains tax hikes could stall the initiative entirely. By raising the capital gains tax rate, funds invested into OZs could be pulled out early to avoid this tax increase. Our government must abandon this folly and embrace the pro-growth policies that have proven to be successful. The OZs program creates three tax benefits. First, the incentives include a tiered federal capital gains tax deferral on investments made in these areas through what are known as Qualified Opportunity Zone Funds (QOFs). QOFs are an investment vehicle, like a partnership, that holds 90% or more of its assets in OZ property. Through QOFs, investors can delay or reduce their capital gains tax liability over time.

Second, OZs created a step-up in basis, which reduces the overall tax burden through increased eligible deductions for investments held in QOFs for at least five years. And third, OZ incentives include eliminating capital gains tax on investments maintained for at least 10 years.

By embracing the power of the OZs program, the government can lift up many forgotten Americans and help put our country back on a path to economic success.

Opportunity Zones Best Practices Report to the President, The White House Opportunity and Revitalization Council (May 2022).