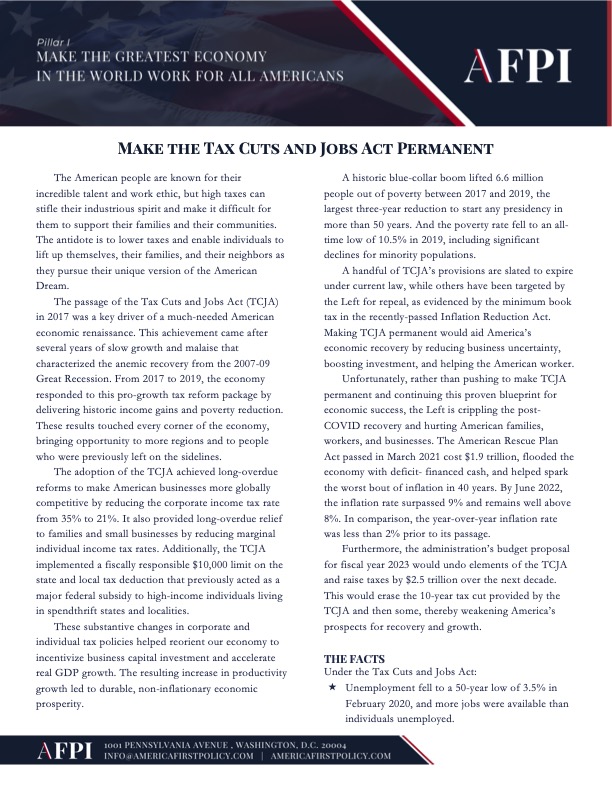 The American people are known for their incredible talent and work ethic, but high taxes can stifle their industrious spirit and make it difficult for them to support their families and their communities. The antidote is to lower taxes and enable individuals to lift up themselves, their families, and their neighbors as they pursue their unique version of the American Dream.

The passage of the Tax Cuts and Jobs Act (TCJA) in 2017 was a key driver of a much-needed American economic renaissance. This achievement came after several years of slow growth and malaise that characterized the anemic recovery from the 2007-09 Great Recession. From 2017 to 2019, the economy responded to this pro-growth tax reform package by delivering historic income gains and poverty reduction. These results touched every corner of the economy, bringing opportunity to more regions and to people who were previously left on the sidelines.

The adoption of the TCJA achieved long-overdue reforms to make American businesses more globally competitive by reducing the corporate income tax rate from 35% to 21%. It also provided long-overdue relief to families and small businesses by reducing marginal individual income tax rates. Additionally, the TCJA implemented a fiscally responsible $10,000 limit on the state and local tax deduction that previously acted as a major federal subsidy to high-income individuals living in spendthrift states and localities.

A historic blue-collar boom lifted 6.6 million people out of poverty between 2017 and 2019, the largest three-year reduction to start any presidency in more than 50 years. And the poverty rate fell to an all-time low of 10.5% in 2019, including significant declines for minority populations.

A handful of TCJA’s provisions are slated to expire under current law, while others have been targeted by the Left for repeal, as evidenced by the minimum book tax in the recently-passed Inflation Reduction Act. Making TCJA permanent would aid America’s economic recovery by reducing business uncertainty, boosting investment, and helping the American worker.

Unfortunately, rather than pushing to make TCJA permanent and continuing this proven blueprint for economic success, the Left is crippling the post-COVID recovery and hurting American families, workers, and businesses. The American Rescue Plan Act passed in March 2021 cost $1.9 trillion, flooded the economy with deficit- financed cash, and helped spark the worst bout of inflation in 40 years. By June 2022, the inflation rate surpassed 9% and remains well above 8%. In comparison, the year-over-year inflation rate was less than 2% prior to its passage.

Furthermore, the administration’s budget proposal for fiscal year 2023 would undo elements of the TCJA and raise taxes by $2.5 trillion over the next decade. This would erase the 10-year tax cut provided by the TCJA and then some, thereby weakening America’s prospects for recovery and growth.

Under the Tax Cuts and Jobs Act:

After 21 months of the current administration’s economic policies:

Back to the Future with the Highest Inflation in Four Decades, America First Policy Institute (Jan. 2022).

Economic Report of the President, Council of Economic Advisers (Feb. 2020).

Economic Report of the President, Council of Economic Advisers (Jan. 2021).