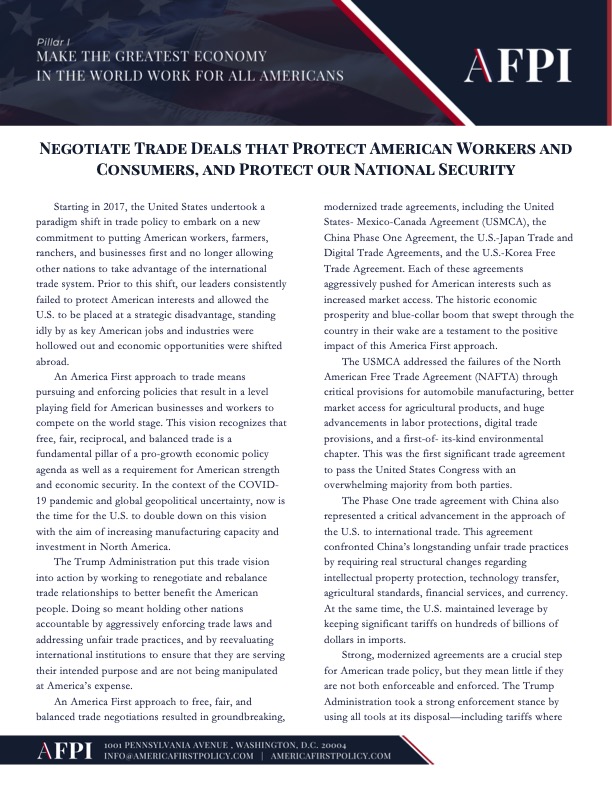 Starting in 2017, the United States undertook a paradigm shift in trade policy to embark on a new commitment to putting American workers, farmers, ranchers, and businesses first and no longer allowing other nations to take advantage of the international trade system. Prior to this shift, our leaders consistently failed to protect American interests and allowed the U.S. to be placed at a strategic disadvantage, standing idly by as key American jobs and industries were hollowed out and economic opportunities were shifted abroad.

An America First approach to trade means pursuing and enforcing policies that result in a level playing field for American businesses and workers to compete on the world stage. This vision recognizes that free, fair, reciprocal, and balanced trade is a fundamental pillar of a pro-growth economic policy agenda as well as a requirement for American strength and economic security. In the context of the COVID-19 pandemic and global geopolitical uncertainty, now is the time for the U.S. to double down on this vision with the aim of increasing manufacturing capacity and investment in North America.

The Trump Administration put this trade vision into action by working to renegotiate and rebalance trade relationships to better benefit the American people. Doing so meant holding other nations accountable by aggressively enforcing trade laws and addressing unfair trade practices, and by reevaluating international institutions to ensure that they are serving their intended purpose and are not being manipulated at America’s expense.

An America First approach to free, fair, and balanced trade negotiations resulted in groundbreaking, modernized trade agreements, including the United States- Mexico-Canada Agreement (USMCA), the China Phase One Agreement, the U.S.-Japan Trade and Digital Trade Agreements, and the U.S.-Korea Free Trade Agreement. Each of these agreements aggressively pushed for American interests such as increased market access. The historic economic prosperity and blue-collar boom that swept through the country in their wake are a testament to the positive impact of this America First approach.

The USMCA addressed the failures of the North American Free Trade Agreement (NAFTA) through critical provisions for automobile manufacturing, better market access for agricultural products, and huge advancements in labor protections, digital trade provisions, and a first-of- its-kind environmental chapter. This was the first significant trade agreement to pass the United States Congress with an overwhelming majority from both parties.

The Phase One trade agreement with China also represented a critical advancement in the approach of the U.S. to international trade. This agreement confronted China’s longstanding unfair trade practices by requiring real structural changes regarding intellectual property protection, technology transfer, agricultural standards, financial services, and currency. At the same time, the U.S. maintained leverage by keeping significant tariffs on hundreds of billions of dollars in imports.

Strong, modernized agreements are a crucial step for American trade policy, but they mean little if they are not both enforceable and enforced. The Trump Administration took a strong enforcement stance by using all tools at its disposal—including tariffs where appropriate to combat abuses—instead of just relying on litigation at institutions such as the World Trade Organization (WTO) that have failed to fully address violations and protect American interests.

Under the Trump Administration, the U.S. also expanded the use of Section 301 of the Trade Act of 1974 to investigate and take action to protect U.S. rights under trade agreements and respond to certain foreign trade practices. The Administration also used Section 232 of the Trade Expansion Act specifically to address national security threats. No case of failures and manipulation of the international trade system is more obvious than that of China. China has consistently engaged in flagrant trade violations, which range from forced technology transfer to its widespread state-led market distortions that harm American industries and workers, all while enjoying the benefits of membership in the World Trade Organization.

Under the Trump Administration, the U.S. acted on longstanding failures to address China’s bad behavior through investigations under Section 301 and Section 232— the first administration to use these provisions to massively confront China’s unfair trade practices—as well as through pursuing a modernized and enforceable agreement. The Trump Administration was also the first to pursue an environmental enforcement case under our free trade agreements.

It has also become clear that, beyond enforcement of trade laws and development of enforceable agreements, the U.S. must continue to reevaluate its role in international organizations. Our Nation must ensure that these organizations are used for their intended purposes and are not manipulated to the advantage of our adversaries and to the detriment of our workers and businesses.

The Trump Administration made working with our partners to address longstanding concerns about the WTO a key trade priority. This included the first comprehensive study of the Appellate Body, which detailed several failures, including overreach of the body at the expense of the U.S. and other member states, erroneous interpretations of members’ rights and obligations under WTO agreements, and failure of the dispute system to adequately address challenges. The report also included efforts to increase transparency, address chronic non-compliance, and update designations so the WTO can reflect current economic realities. This is a step in the right direction to ensure that U.S. support of and participation in international institutions align with America’s interests, and more broadly, with free- and fair-trade principles.

Going forward, we cannot afford to move away from the America First trade approach and return to the old status quo. Americans deserve a trade policy in which the U.S. fights for them, ensuring the rules are transparent and enforced, and allowing Americans the opportunity to compete and prosper in the world arena. American leaders must put Americans first in creating a future of free, fair, and reciprocal trade.

2021 Trade Policy Agenda and 2020 Annual Report of The President of The United States On The Trade Agreements Program, United States Trade Representative (March 2021).

The Theft of American Intellectual Property: Reassessments Of The Challenge And United States Policy, The National Bureau of Asian Research (Feb. 2017).