Require Voters to Have Photo Identification 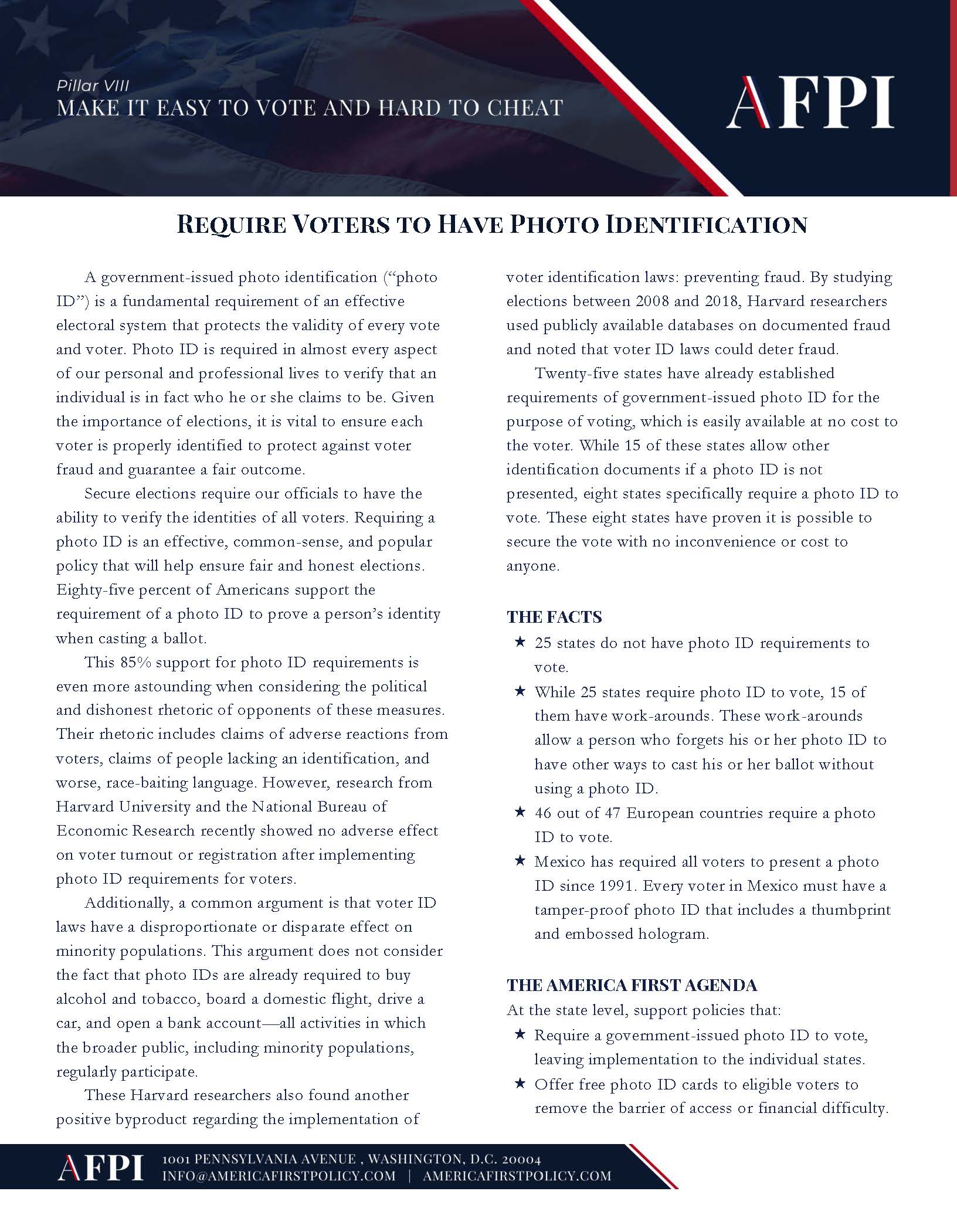 A government-issued photo identification (“photo ID”) is a fundamental requirement of an effective electoral system that protects the validity of every vote and voter. Photo ID is required in almost every aspect of our personal and professional lives to verify that an individual is in fact who he or she claims to be. Given the importance of elections, it is vital to ensure each voter is properly identified to protect against voter fraud and guarantee a fair outcome.

Secure elections require our officials to have the ability to verify the identities of all voters. Requiring a photo ID is an effective, common-sense, and popular policy that will help ensure fair and honest elections. Eighty-five percent of Americans support the requirement of a photo ID to prove a person’s identity when casting a ballot.

This 85% support for photo ID requirements is even more astounding when considering the political and dishonest rhetoric of opponents of these measures. Their rhetoric includes claims of adverse reactions from voters, claims of people lacking an identification, and worse, race- baiting language. However, research from Harvard University and the National Bureau of Economic Research recently showed no adverse effect on voter turnout or registration after implementing photo ID requirements for voters.

Additionally, a common argument is that voter ID laws have a disproportionate or disparate effect on minority populations. This argument does not consider the fact that photo IDs are already required to buy alcohol and tobacco, board a domestic flight, drive a car, and open a bank account—all activities in which the broader public, including minority populations, regularly participate.

These Harvard researchers also found another positive byproduct regarding the implementation of voter identification laws: preventing fraud. By studying elections between 2008 and 2018, Harvard researchers used publicly available databases on documented fraud and noted that voter ID laws could deter fraud.

Twenty-five states have already established requirements of government-issued photo ID for the purpose of voting, which is easily available at no cost to the voter. While 15 of these states allow other identification documents if a photo ID is not presented, eight states specifically require a photo ID to vote. These eight states have proven it is possible to secure the vote with no inconvenience or cost to anyone.