Clean Up Voter Rolls Before Every Election 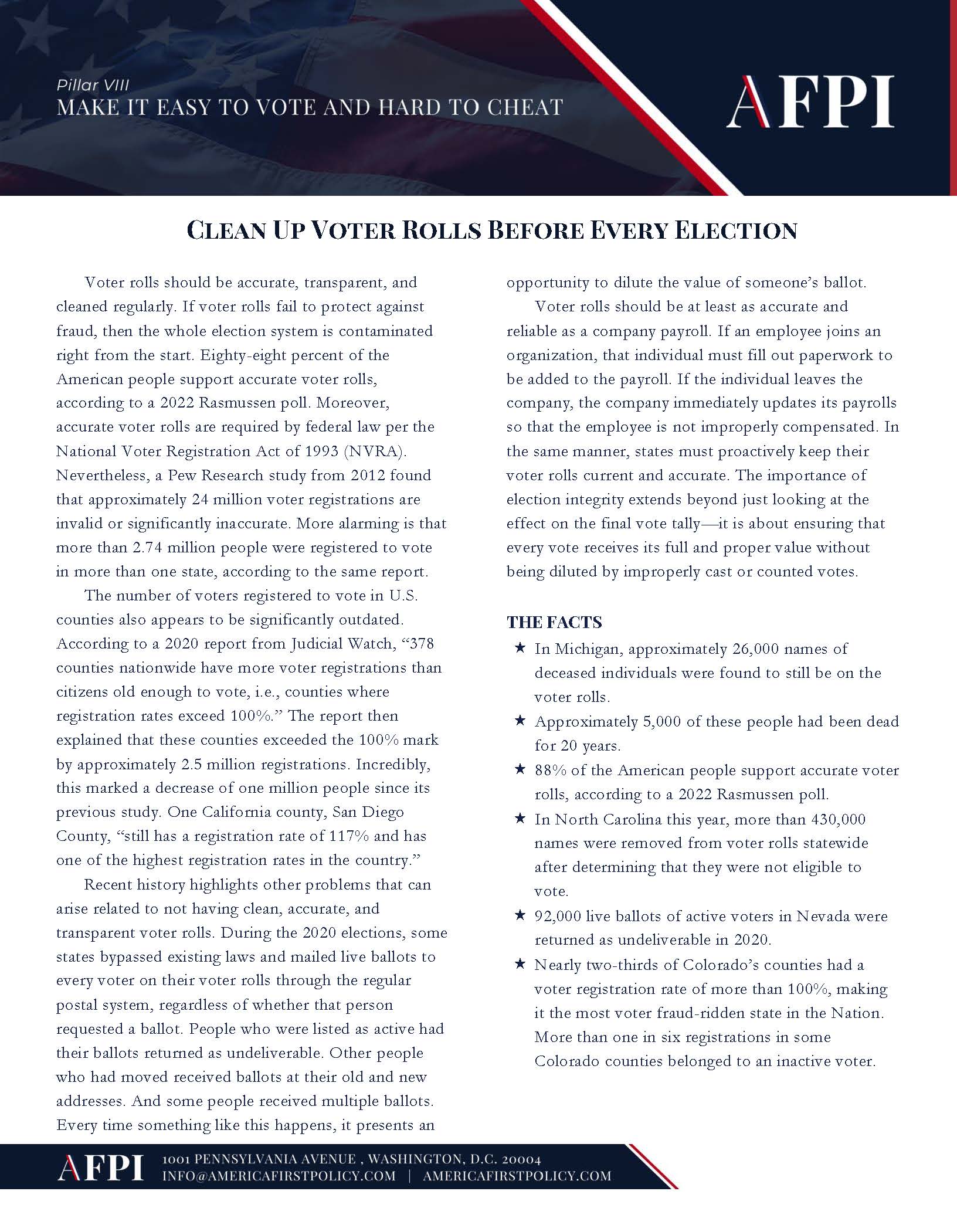 Voter rolls should be accurate, transparent, and cleaned regularly. If voter rolls fail to protect against fraud, then the whole election system is contaminated right from the start. Eighty-eight percent of the American people support accurate voter rolls, according to a 2022 Rasmussen poll. Moreover, accurate voter rolls are required by federal law per the National Voter Registration Act of 1993 (NVRA). Nevertheless, a Pew Research study from 2012 found that approximately 24 million voter registrations are invalid or significantly inaccurate. More alarming is that more than 2.74 million people were registered to vote in more than one state, according to the same report.

The number of voters registered to vote in U.S. counties also appears to be significantly outdated. According to a 2020 report from Judicial Watch, “378 counties nationwide have more voter registrations than citizens old enough to vote, i.e., counties where registration rates exceed 100%.” The report then explained that these counties exceeded the 100% mark by approximately 2.5 million registrations. Incredibly, this marked a decrease of one million people since its previous study. One California county, San Diego County, “still has a registration rate of 117% and has one of the highest registration rates in the country.”

Recent history highlights other problems that can arise related to not having clean, accurate, and transparent voter rolls. During the 2020 elections, some states bypassed existing laws and mailed live ballots to every voter on their voter rolls through the regular postal system, regardless of whether that person requested a ballot. People who were listed as active had their ballots returned as undeliverable. Other people who had moved received ballots at their old and new addresses. And some people received multiple ballots. Every time something like this happens, it presents an opportunity to dilute the value of someone’s ballot.

Voter rolls should be at least as accurate and reliable as a company payroll. If an employee joins an organization, that individual must fill out paperwork to be added to the payroll. If the individual leaves the company, the company immediately updates its payrolls so that the employee is not improperly compensated. In the same manner, states must proactively keep their voter rolls current and accurate.

The importance of election integrity extends beyond just looking at the effect on the final vote tally—it is about ensuring that every vote receives its full and proper value without being diluted by improperly cast or counted votes.