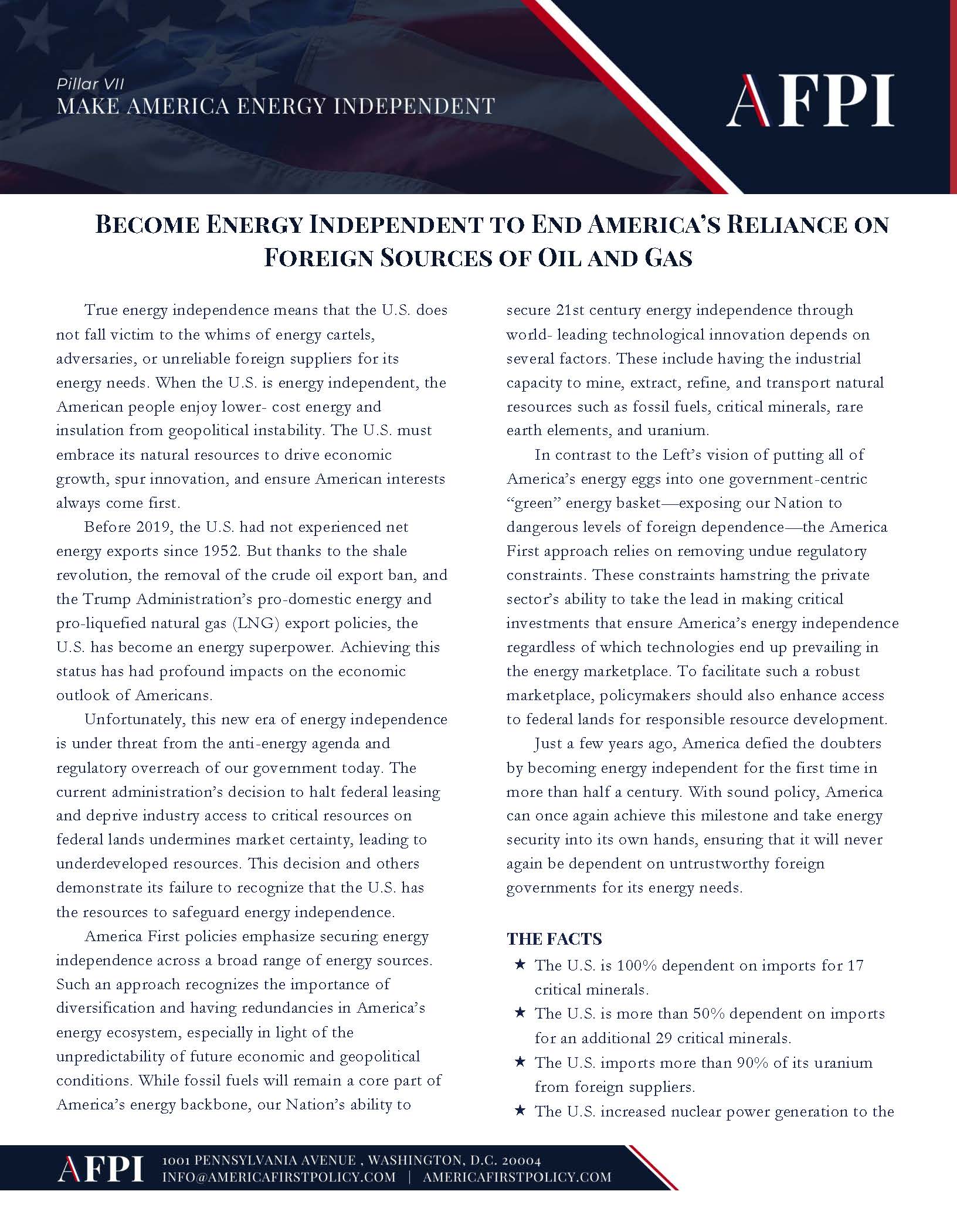 True energy independence means that the U.S. does not fall victim to the whims of energy cartels, adversaries, or unreliable foreign suppliers for its energy needs. When the U.S. is energy independent, the American people enjoy lower- cost energy and insulation from geopolitical instability. The U.S. must embrace its natural resources to drive economic growth, spur innovation, and ensure American interests always come first.

Before 2019, the U.S. had not experienced net energy exports since 1952. But thanks to the shale revolution, the removal of the crude oil export ban, and the Trump Administration’s pro-domestic energy and pro-liquefied natural gas (LNG) export policies, the U.S. has become an energy superpower. Achieving this status has had profound impacts on the economic outlook of Americans.

Unfortunately, this new era of energy independence is under threat from the anti-energy agenda and regulatory overreach of our government today. The current administration’s decision to halt federal leasing and deprive industry access to critical resources on federal lands undermines market certainty, leading to underdeveloped resources. This decision and others demonstrate its failure to recognize that the U.S. has the resources to safeguard energy independence.

America First policies emphasize securing energy independence across a broad range of energy sources. Such an approach recognizes the importance of diversification and having redundancies in America’s energy ecosystem, especially in light of the unpredictability of future economic and geopolitical conditions. While fossil fuels will remain a core part of America’s energy backbone, our Nation’s ability to secure 21st century energy independence through world- leading technological innovation depends on several factors. These include having the industrial capacity to mine, extract, refine, and transport natural resources such as fossil fuels, critical minerals, rare earth elements, and uranium.

In contrast to the Left’s vision of putting all of America’s energy eggs into one government-centric “green” energy basket—exposing our Nation to dangerous levels of foreign dependence—the America First approach relies on removing undue regulatory constraints. These constraints hamstring the private sector’s ability to take the lead in making critical investments that ensure America’s energy independence regardless of which technologies end up prevailing in the energy marketplace. To facilitate such a robust marketplace, policymakers should also enhance access to federal lands for responsible resource development.

Just a few years ago, America defied the doubters by becoming energy independent for the first time in more than half a century. With sound policy, America can once again achieve this milestone and take energy security into its own hands, ensuring that it will never again be dependent on untrustworthy foreign governments for its energy needs.