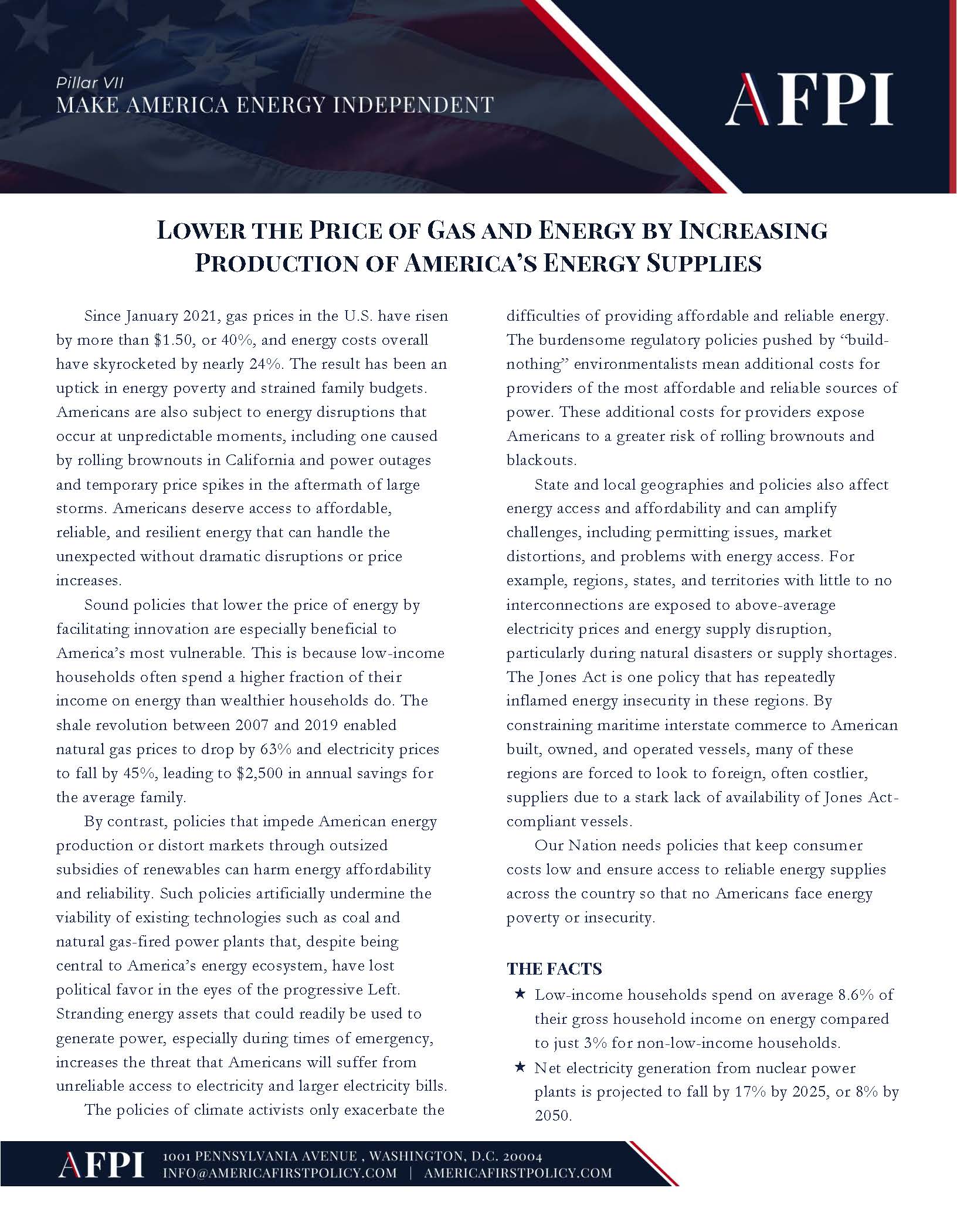 Since January 2021, gas prices in the U.S. have risen by more than $1.50, or 40%, and energy costs overall have skyrocketed by nearly 24%. The result has been an uptick in energy poverty and strained family budgets. Americans are also subject to energy disruptions that occur at unpredictable moments, including one caused by rolling brownouts in California and power outages and temporary price spikes in the aftermath of large storms. Americans deserve access to affordable, reliable, and resilient energy that can handle the unexpected without dramatic disruptions or price increases.

Sound policies that lower the price of energy by facilitating innovation are especially beneficial to America’s most vulnerable. This is because low-income households often spend a higher fraction of their income on energy than wealthier households do. The shale revolution between 2007 and 2019 enabled natural gas prices to drop by 63% and electricity prices to fall by 45%, leading to $2,500 in annual savings for the average family.

By contrast, policies that impede American energy production or distort markets through outsized subsidies of renewables can harm energy affordability and reliability. Such policies artificially undermine the viability of existing technologies such as coal and natural gas-fired power plants that, despite being central to America’s energy ecosystem, have lost political favor in the eyes of the progressive Left. Stranding energy assets that could readily be used to generate power, especially during times of emergency, increases the threat that Americans will suffer from unreliable access to electricity and larger electricity bills.

The policies of climate activists only exacerbate the difficulties of providing affordable and reliable energy. The burdensome regulatory policies pushed by “build-nothing” environmentalists mean additional costs for providers of the most affordable and reliable sources of power. These additional costs for providers expose Americans to a greater risk of rolling brownouts and blackouts.

State and local geographies and policies also affect energy access and affordability and can amplify challenges, including permitting issues, market distortions, and problems with energy access. For example, regions, states, and territories with little to no interconnections are exposed to above-average electricity prices and energy supply disruption, particularly during natural disasters or supply shortages.

The Jones Act is one policy that has repeatedly inflamed energy insecurity in these regions. By constraining maritime interstate commerce to American built, owned, and operated vessels, many of these regions are forced to look to foreign, often costlier, suppliers due to a stark lack of availability of Jones Act-compliant vessels.

Our Nation needs policies that keep consumer costs low and ensure access to reliable energy supplies across
the country so that no Americans face energy poverty or insecurity.