Provide Clean Air, Clean Water, and a Clean Environment for All Americans 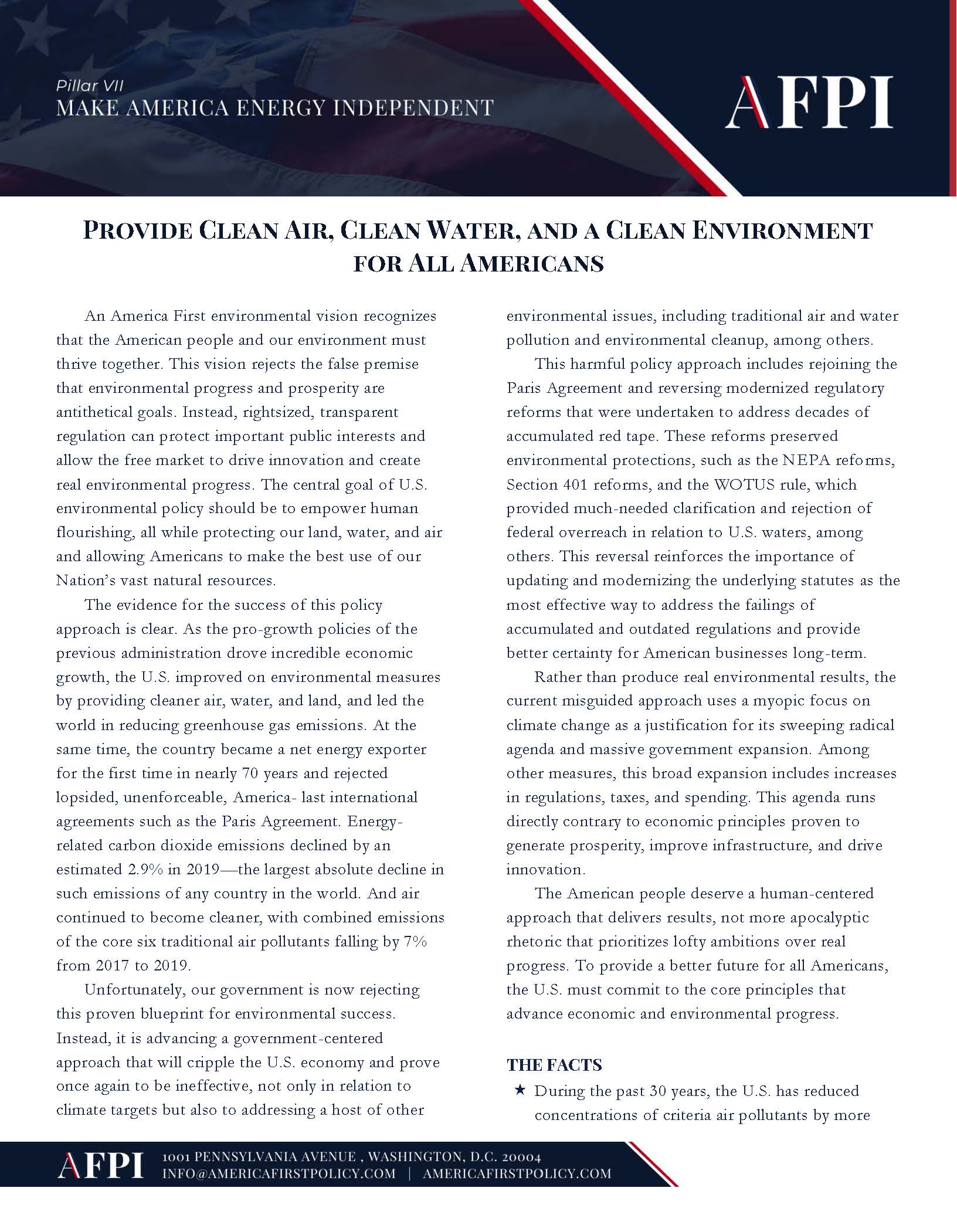 An America First environmental vision recognizes that the American people and our environment must thrive together. This vision rejects the false premise that environmental progress and prosperity are antithetical goals. Instead, rightsized, transparent regulation can protect important public interests and allow the free market to drive innovation and create real environmental progress. The central goal of U.S. environmental policy should be to empower human flourishing, all while protecting our land, water, and air and allowing Americans to make the best use of our Nation’s vast natural resources.

The evidence for the success of this policy approach is clear. As the pro-growth policies of the previous administration drove incredible economic growth, the U.S. improved on environmental measures by providing cleaner air, water, and land, and led the world in reducing greenhouse gas emissions. At the same time, the country became a net energy exporter for the first time in nearly 70 years and rejected lopsided, unenforceable, America- last international agreements such as the Paris Agreement. Energy-related carbon dioxide emissions declined by an estimated 2.9% in 2019—the largest absolute decline in such emissions of any country in the world. And air continued to become cleaner, with combined emissions of the core six traditional air pollutants falling by 7% from 2017 to 2019.

Unfortunately, our government is now rejecting this proven blueprint for environmental success. Instead, it is advancing a government-centered approach that will cripple the U.S. economy and prove once again to be ineffective, not only in relation to climate targets but also to addressing a host of other environmental issues, including traditional air and water pollution and environmental cleanup, among others. This harmful policy approach includes rejoining the Paris Agreement and reversing modernized regulatory reforms that were undertaken to address decades of accumulated red tape.

These reforms preserved environmental protections, such as the NEPA reforms, Section 401 reforms, and the WOTUS rule, which provided much-needed clarification and rejection of federal overreach in relation to U.S. waters, among others. This reversal reinforces the importance of updating and modernizing the underlying statutes as the most effective way to address the failings of accumulated and outdated regulations and provide better certainty for American businesses long-term.

Rather than produce real environmental results, the current misguided approach uses a myopic focus on climate change as a justification for its sweeping radical agenda and massive government expansion. Among other measures, this broad expansion includes increases in regulations, taxes, and spending. This agenda runs directly contrary to economic principles proven to generate prosperity, improve infrastructure, and drive innovation.

The American people deserve a human-centered approach that delivers results, not more apocalyptic rhetoric that prioritizes lofty ambitions over real progress. To provide a better future for all Americans, the U.S. must commit to the core principles that advance economic and environmental progress.