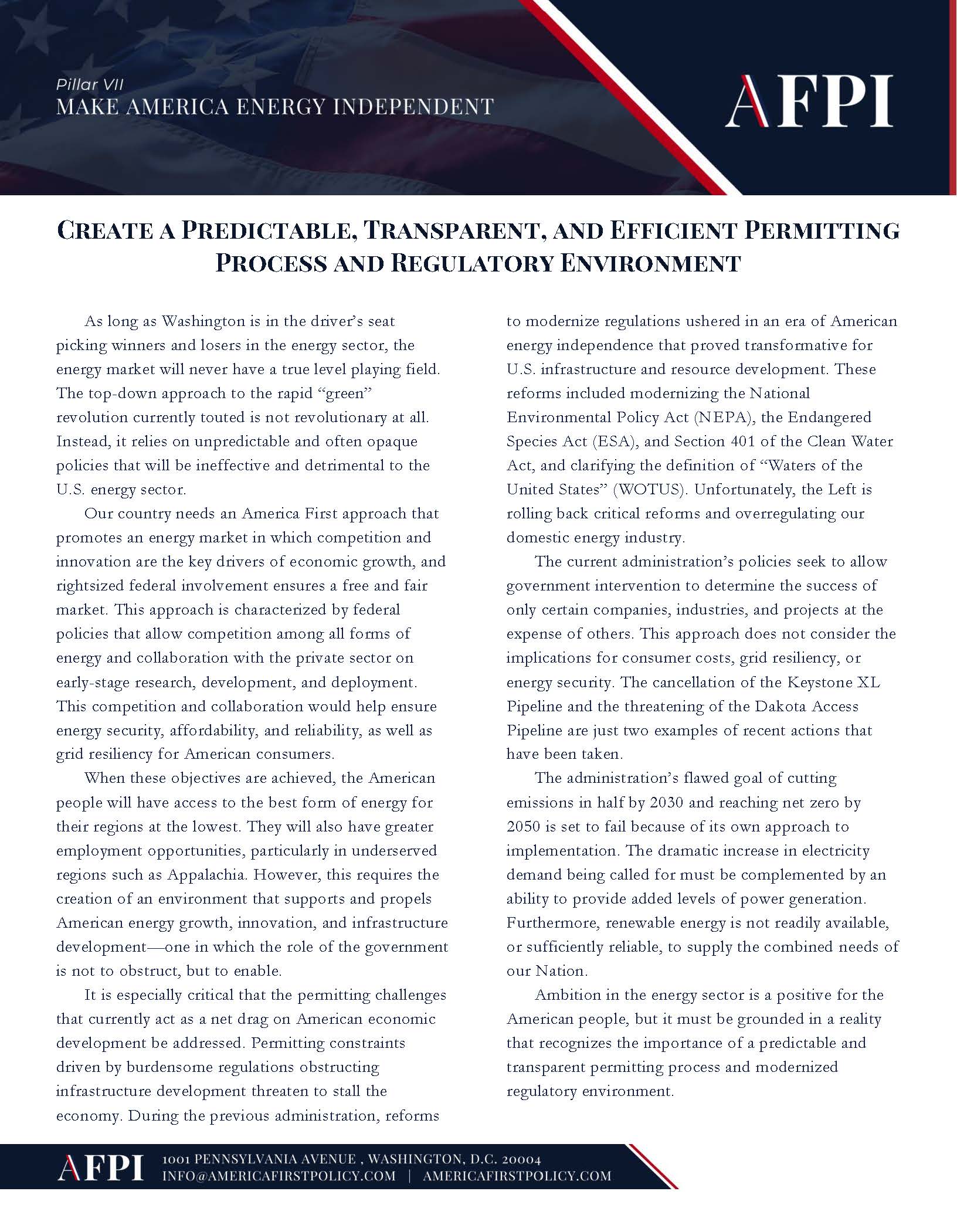 As long as Washington is in the driver’s seat picking winners and losers in the energy sector, the energy market will never have a true level playing field. The top-down approach to the rapid “green” revolution currently touted is not revolutionary at all. Instead, it relies on unpredictable and often opaque policies that will be ineffective and detrimental to the U.S. energy sector.

Our country needs an America First approach that promotes an energy market in which competition and innovation are the key drivers of economic growth, and rightsized federal involvement ensures a free and fair market. This approach is characterized by federal policies that allow competition among all forms of energy and collaboration with the private sector on early-stage research, development, and deployment. This competition and collaboration would help ensure energy security, affordability, and reliability, as well as grid resiliency for American consumers.

When these objectives are achieved, the American people will have access to the best form of energy for their regions at the lowest . They will also have greater employment opportunities, particularly in underserved regions such as Appalachia. However, this requires the creation of an environment that supports and propels American energy growth, innovation, and infrastructure development—one in which the role of the government is not to obstruct, but to enable.

It is especially critical that the permitting challenges that currently act as a net drag on American economic development be addressed. Permitting constraints driven by burdensome regulations obstructing infrastructure development threaten to stall the economy. During the previous administration, reforms to modernize regulations ushered in an era of American energy independence that proved transformative for U.S. infrastructure and resource development. These reforms included modernizing the National Environmental Policy Act (NEPA), the Endangered Species Act (ESA), and Section 401 of the Clean Water Act, and clarifying the definition of “Waters of the United States” (WOTUS). Unfortunately, the Left is rolling back critical reforms and overregulating our domestic energy industry.

The current administration’s policies seek to allow government intervention to determine the success of only certain companies, industries, and projects at the expense of others. This approach does not consider the implications for consumer costs, grid resiliency, or energy security. The cancellation of the Keystone XL Pipeline and the threatening of the Dakota Access Pipeline are just two examples of recent actions that have been taken.

The administration’s flawed goal of cutting emissions in half by 2030 and reaching net zero by 2050 is set to fail because of its own approach to implementation. The dramatic increase in electricity demand being called for must be complemented by an ability to provide added levels of power generation. Furthermore, renewable energy is not readily available, or sufficiently reliable, to supply the combined needs of our Nation.

Ambition in the energy sector is a positive for the American people, but it must be grounded in a reality that recognizes the importance of a predictable and transparent permitting process and modernized regulatory environment.