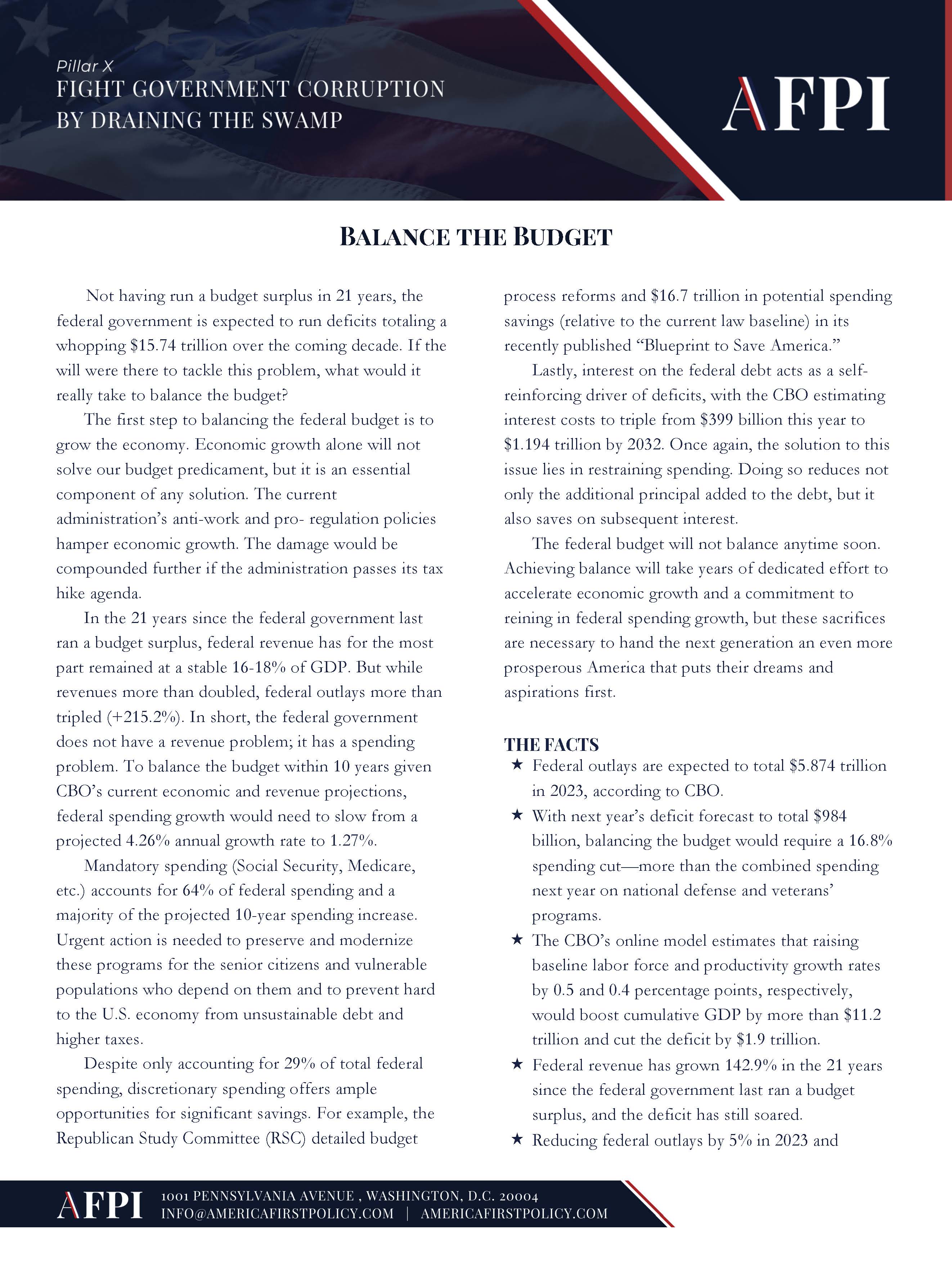 Not having run a budget surplus in 21 years, the federal government is expected to run deficits totaling a whopping $15.74 trillion over the coming decade. If the will were there to tackle this problem, what would it really take to balance the budget?

The first step to balancing the federal budget is to grow the economy. Economic growth alone will not solve our budget predicament, but it is an essential component of any solution. The current administration’s anti-work and pro- regulation policies hamper economic growth. The damage would be compounded further if the administration passes its tax hike agenda.

In the 21 years since the federal government last ran a budget surplus, federal revenue has for the most part remained at a stable 16-18% of GDP. But while revenues more than doubled, federal outlays more than tripled (+215.2%). In short, the federal government does not have a revenue problem; it has a spending problem. To balance the budget within 10 years given CBO’s current economic and revenue projections, federal spending growth would need to slow from a projected 4.26% annual growth rate to 1.27%.

Mandatory spending (Social Security, Medicare, etc.) accounts for 64% of federal spending and a majority of the projected 10-year spending increase. Urgent action is needed to preserve and modernize these programs for the senior citizens and vulnerable populations who depend on them and to prevent hard to the U.S. economy from unsustainable debt and higher taxes.

Despite only accounting for 29% of total federal spending, discretionary spending offers ample opportunities for significant savings. For example, the Republican Study Committee (RSC) detailed budget process reforms and $16.7 trillion in potential spending savings (relative to the current law baseline) in its recently published “Blueprint to Save America.”

Lastly, interest on the federal debt acts as a self- reinforcing driver of deficits, with the CBO estimating interest costs to triple from $399 billion this year to $1.194 trillion by 2032. Once again, the solution to this issue lies in restraining spending. Doing so reduces not only the additional principal added to the debt, but it also saves on subsequent interest.

The federal budget will not balance anytime soon. Achieving balance will take years of dedicated effort to accelerate economic growth and a commitment to reining in federal spending growth, but these sacrifices are necessary to hand the next generation an even more prosperous America that puts their dreams and aspirations first.

Regulation and Productivity by Antony Davies, Mercatus Center (May 2014).

Workbook for How Changes in Economic Conditions Might Affect the Federal Budget: 2022 to 2032, Congressional Budget Office (June 2022).