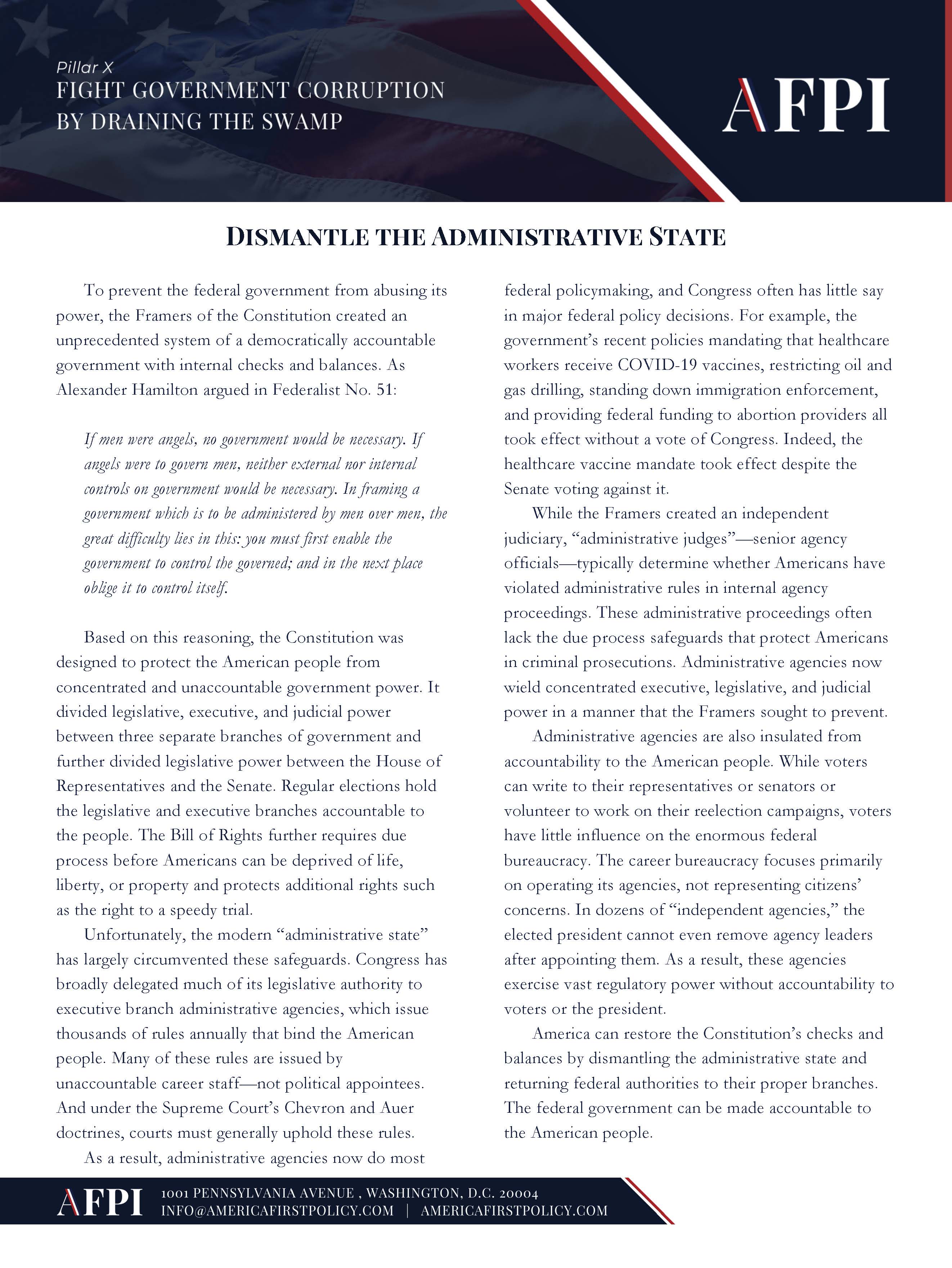 To prevent the federal government from abusing its power, the Framers of the Constitution created an unprecedented system of a democratically accountable government with internal checks and balances. As Alexander Hamilton argued in Federalist No. 51:

Based on this reasoning, the Constitution was designed to protect the American people from concentrated and unaccountable government power. It divided legislative, executive, and judicial power between three separate branches of government and further divided legislative power between the House of Representatives and the Senate. Regular elections hold the legislative and executive branches accountable to the people. The Bill of Rights further requires due process before Americans can be deprived of life, liberty, or property and protects additional rights such as the right to a speedy trial.

Unfortunately, the modern “administrative state” has largely circumvented these safeguards. Congress has broadly delegated much of its legislative authority to executive branch administrative agencies, which issue thousands of rules annually that bind the American people. Many of these rules are issued by unaccountable career staff—not political appointees. And under the Supreme Court’s Chevron and Auer doctrines, courts must generally uphold these rules.

As a result, administrative agencies now do most federal policymaking, and Congress often has little say in major federal policy decisions. For example, the government’s recent policies mandating that healthcare workers receive COVID-19 vaccines, restricting oil and gas drilling, standing down immigration enforcement, and providing federal funding to abortion providers all took effect without a vote of Congress. Indeed, the healthcare vaccine mandate took effect despite the Senate voting against it.

While the Framers created an independent judiciary, “administrative judges”—senior agency officials—typically determine whether Americans have violated administrative rules in internal agency proceedings. These administrative proceedings often lack the due process safeguards that protect Americans in criminal prosecutions. Administrative agencies now wield concentrated executive, legislative, and judicial power in a manner that the Framers sought to prevent.

Administrative agencies are also insulated from accountability to the American people. While voters can write to their representatives or senators or volunteer to work on their reelection campaigns, voters have little influence on the enormous federal bureaucracy. The career bureaucracy focuses primarily on operating its agencies, not representing citizens’ concerns. In dozens of “independent agencies,” the elected president cannot even remove agency leaders after appointing them. As a result, these agencies exercise vast regulatory power without accountability to voters or the president.

America can restore the Constitution’s checks and balances by dismantling the administrative state and returning federal authorities to their proper branches. The federal government can be made accountable to the American people.

Elections don’t matter unless you have this rulemaking fix by Joe Luppino-Esposito, The Hill (March 2022).

Trump’s ‘Regulatory Bill of Rights’ hasn’t gotten much attention — but it should by Oliver Dunford, The Hill (June 2020).