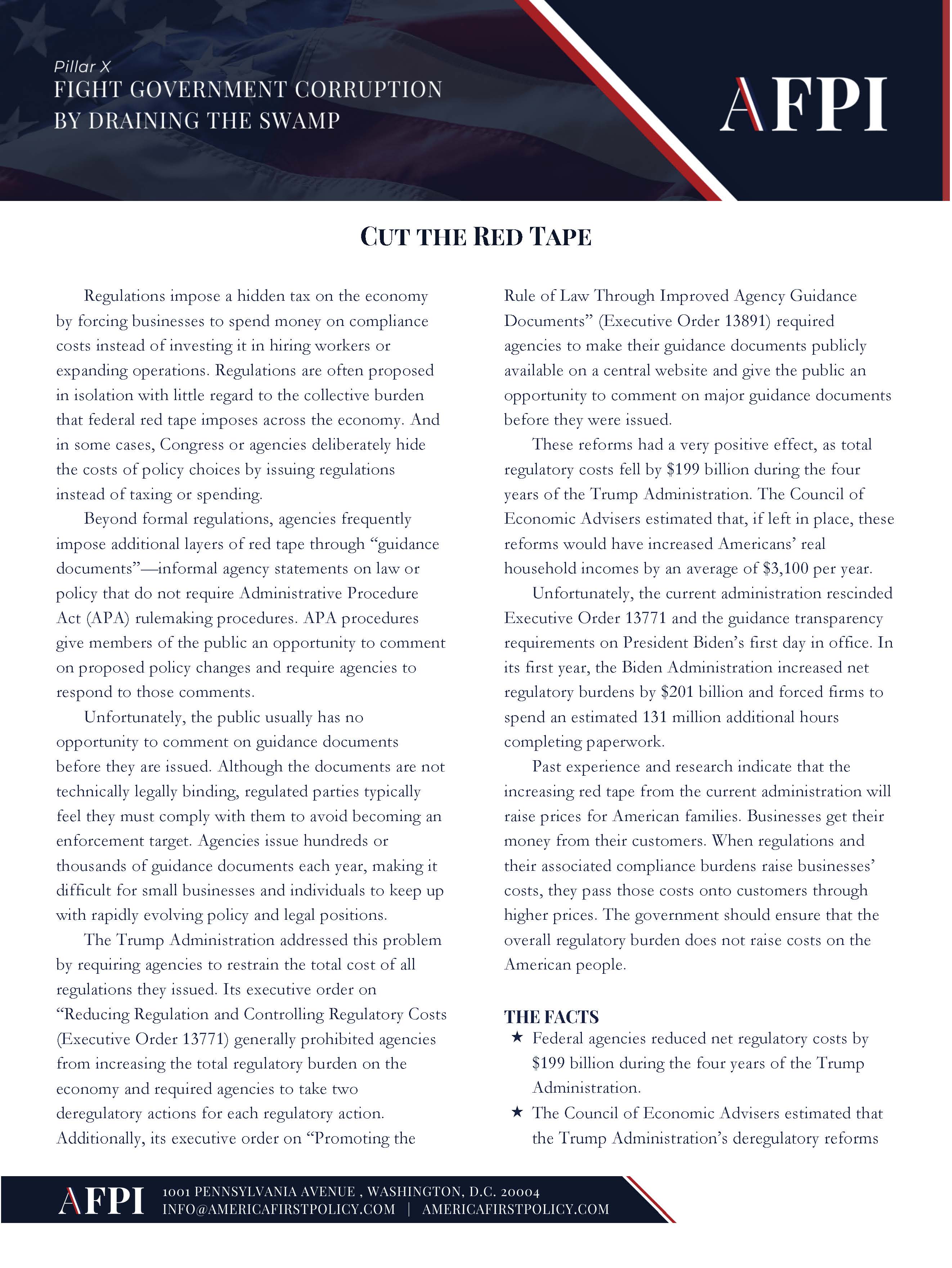 Regulations impose a hidden tax on the economy by forcing businesses to spend money on compliance costs instead of investing it in hiring workers or expanding operations. Regulations are often proposed in isolation with little regard to the collective burden that federal red tape imposes across the economy. And in some cases, Congress or agencies deliberately hide the costs of policy choices by issuing regulations instead of taxing or spending.

Beyond formal regulations, agencies frequently impose additional layers of red tape through “guidance documents”—informal agency statements on law or policy that do not require Administrative Procedure Act (APA) rulemaking procedures. APA procedures give members of the public an opportunity to comment on proposed policy changes and require agencies to respond to those comments.

Unfortunately, the public usually has no opportunity to comment on guidance documents before they are issued. Although the documents are not technically legally binding, regulated parties typically feel they must comply with them to avoid becoming an enforcement target. Agencies issue hundreds or thousands of guidance documents each year, making it difficult for small businesses and individuals to keep up with rapidly evolving policy and legal positions.

The Trump Administration addressed this problem by requiring agencies to restrain the total cost of all regulations they issued. Its executive order on “Reducing Regulation and Controlling Regulatory Costs (Executive Order 13771) generally prohibited agencies from increasing the total regulatory burden on the economy and required agencies to take two deregulatory actions for each regulatory action. Additionally, its executive order on “Promoting the Rule of Law Through Improved Agency Guidance Documents” (Executive Order 13891) required agencies to make their guidance documents publicly available on a central website and give the public an opportunity to comment on major guidance documents before they were issued.

These reforms had a very positive effect, as total regulatory costs fell by $199 billion during the four years of the Trump Administration. The Council of Economic Advisers estimated that, if left in place, these reforms would have increased Americans’ real household incomes by an average of $3,100 per year.

Past experience and research indicate that the increasing red tape from the current administration will raise prices for American families. Businesses get their money from their customers. When regulations and their associated compliance burdens raise businesses’ costs, they pass those costs onto customers through higher prices. The government should ensure that the overall regulatory burden does not raise costs on the American people.

Economic Report of the President, Council of Economic Advisers (Feb. 2020).