Move Federal Agencies and Decision-Making Closer to the People 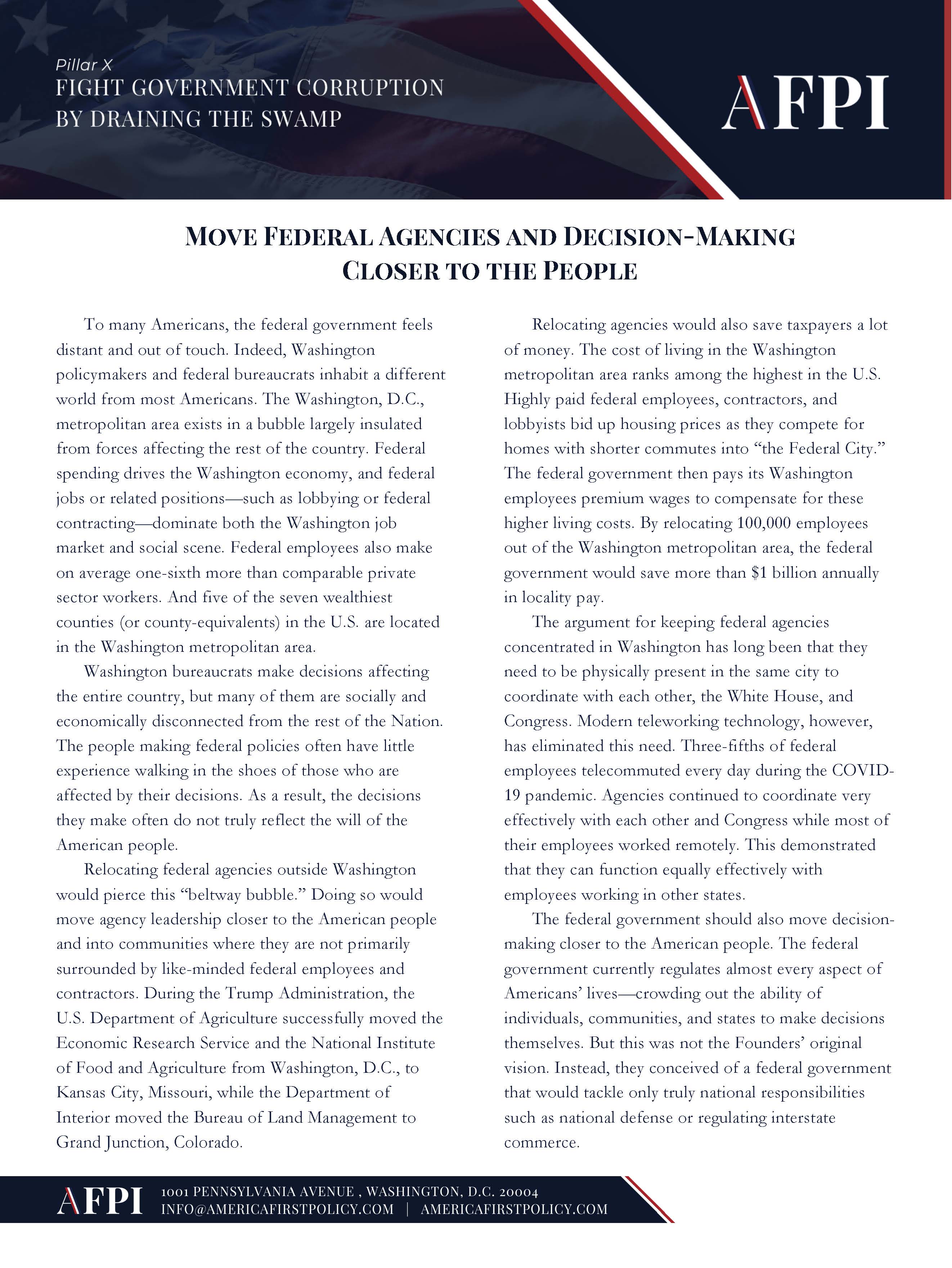 To many Americans, the federal government feels distant and out of touch. Indeed, Washington policymakers and federal bureaucrats inhabit a different world from most Americans. The Washington, D.C., metropolitan area exists in a bubble largely insulated from forces affecting the rest of the country. Federal spending drives the Washington economy, and federal jobs or related positions—such as lobbying or federal contracting—dominate both the Washington job market and social scene. Federal employees also make on average one-sixth more than comparable private sector workers. And five of the seven wealthiest counties (or county-equivalents) in the U.S. are located in the Washington metropolitan area.

Washington bureaucrats make decisions affecting the entire country, but many of them are socially and economically disconnected from the rest of the Nation. The people making federal policies often have little experience walking in the shoes of those who are affected by their decisions. As a result, the decisions they make often do not truly reflect the will of the American people.

Relocating federal agencies outside Washington would pierce this “beltway bubble.” Doing so would move agency leadership closer to the American people and into communities where they are not primarily surrounded by like-minded federal employees and contractors. During the Trump Administration, the U.S. Department of Agriculture successfully moved the Economic Research Service and the National Institute of Food and Agriculture from Washington, D.C., to Kansas City, Missouri, while the Department of Interior moved the Bureau of Land Management to Grand Junction, Colorado.

Relocating agencies would also save taxpayers a lot of money. The cost of living in the Washington metropolitan area ranks among the highest in the U.S. Highly paid federal employees, contractors, and lobbyists bid up housing prices as they compete for homes with shorter commutes into “the Federal City.” The federal government then pays its Washington employees premium wages to compensate for these higher living costs. By relocating 100,000 employees out of the Washington metropolitan area, the federal government would save more than $1 billion annually in locality pay.

The argument for keeping federal agencies concentrated in Washington has long been that they need to be physically present in the same city to coordinate with each other, the White House, and Congress. Modern teleworking technology, however, has eliminated this need. Three-fifths of federal employees telecommuted every day during the COVID-19 pandemic. Agencies continued to coordinate very effectively with each other and Congress while most of their employees worked remotely. This demonstrated that they can function equally effectively with employees working in other states.

The federal government should also move decision- making closer to the American people. The federal government currently regulates almost every aspect of Americans’ lives—crowding out the ability of individuals, communities, and states to make decisions themselves. But this was not the Founders’ original vision. Instead, they conceived of a federal government that would tackle only truly national responsibilities such as national defense or regulating interstate commerce.

However, the Supreme Court of the United States has interpreted federal authority to regulate interstate commerce very broadly, and it now includes matters that only tangentially affect interstate commerce. The federal government has consequently swelled from one of limited and enumerated powers to one with expansive authority to regulate every facet of Americans’ lives.

The federal government should return to the Framers’ vision. In the case of interstate commerce, Congress or the courts should restrict federal regulatory agencies’ jurisdiction to truly interstate economic activities. Regulation of matters that only indirectly affect interstate commerce should be left to states or local communities, which are better able to judge their unique needs.