Reform the Civil Service to Create Accountability in the Bureaucracy 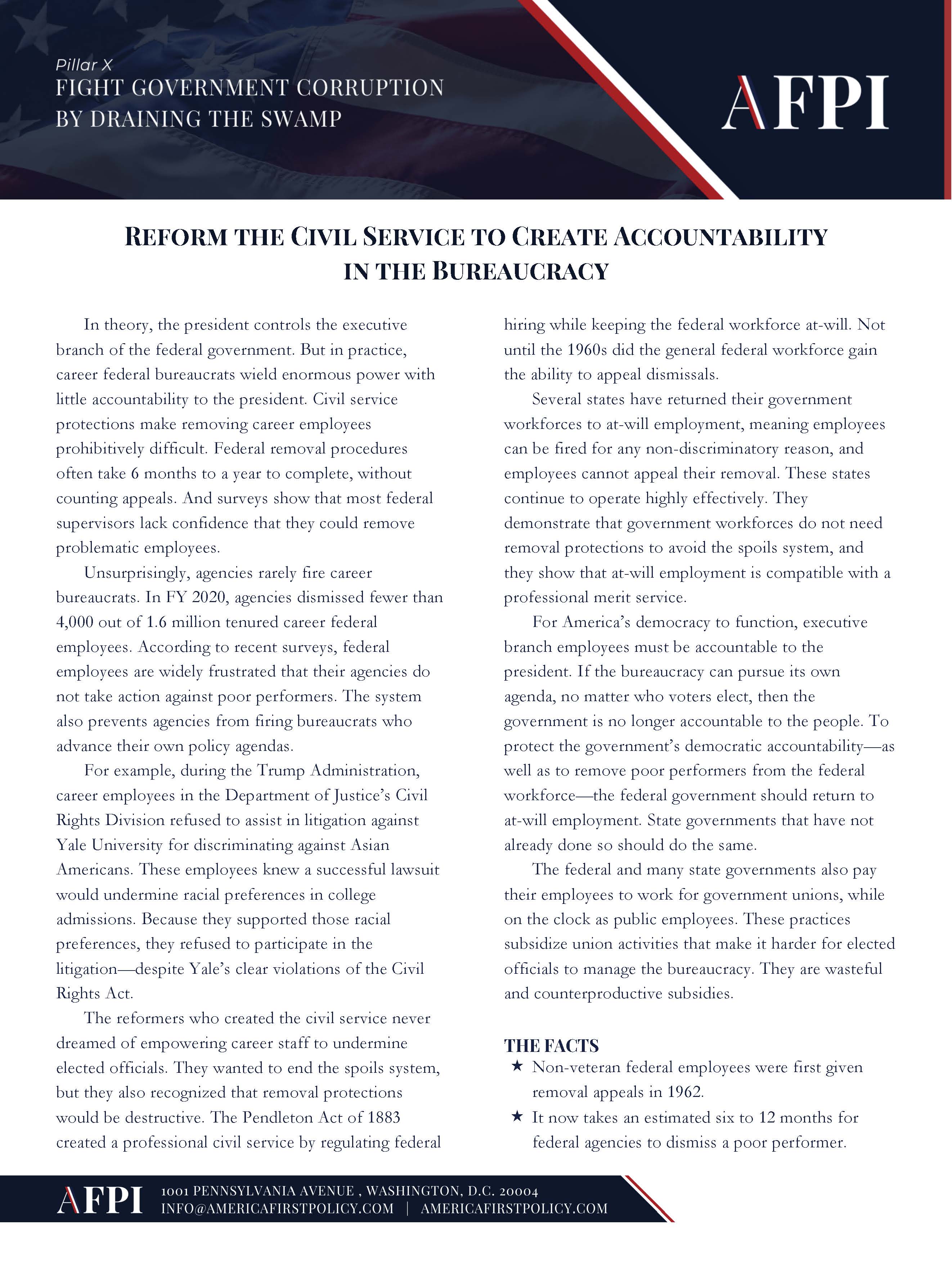 In theory, the president controls the executive branch of the federal government. But in practice, career federal bureaucrats wield enormous power with little accountability to the president. Civil service protections make removing career employees prohibitively difficult. Federal removal procedures often take 6 months to a year to complete, without counting appeals. And surveys show that most federal supervisors lack confidence that they could remove problematic employees.

Unsurprisingly, agencies rarely fire career bureaucrats. In FY 2020, agencies dismissed fewer than 4,000 out of 1.6 million tenured career federal employees. According to recent surveys, federal employees are widely frustrated that their agencies do not take action against poor performers. The system also prevents agencies from firing bureaucrats who advance their own policy agendas.

For example, during the Trump Administration, career employees in the Department of Justice’s Civil Rights Division refused to assist in litigation against Yale University for discriminating against Asian Americans. These employees knew a successful lawsuit would undermine racial preferences in college admissions. Because they supported those racial preferences, they refused to participate in the litigation—despite Yale’s clear violations of the Civil Rights Act.

The reformers who created the civil service never dreamed of empowering career staff to undermine elected officials. They wanted to end the spoils system, but they also recognized that removal protections would be destructive. The Pendleton Act of 1883 created a professional civil service by regulating federal hiring while keeping the federal workforce at-will. Not until the 1960s did the general federal workforce gain the ability to appeal dismissals.

Several states have returned their government workforces to at-will employment, meaning employees can be fired for any non-discriminatory reason, and employees cannot appeal their removal. These states continue to operate highly effectively. They demonstrate that government workforces do not need removal protections to avoid the spoils system, and they show that at-will employment is compatible with a professional merit service.

The federal and many state governments also pay their employees to work for government unions, while on the clock as public employees. These practices subsidize union activities that make it harder for elected officials to manage the bureaucracy. They are wasteful and counterproductive subsidies.

Biden is re-filling the swamp with unaccountable bureaucrats by James Sherk, The Federalist (June 2021).