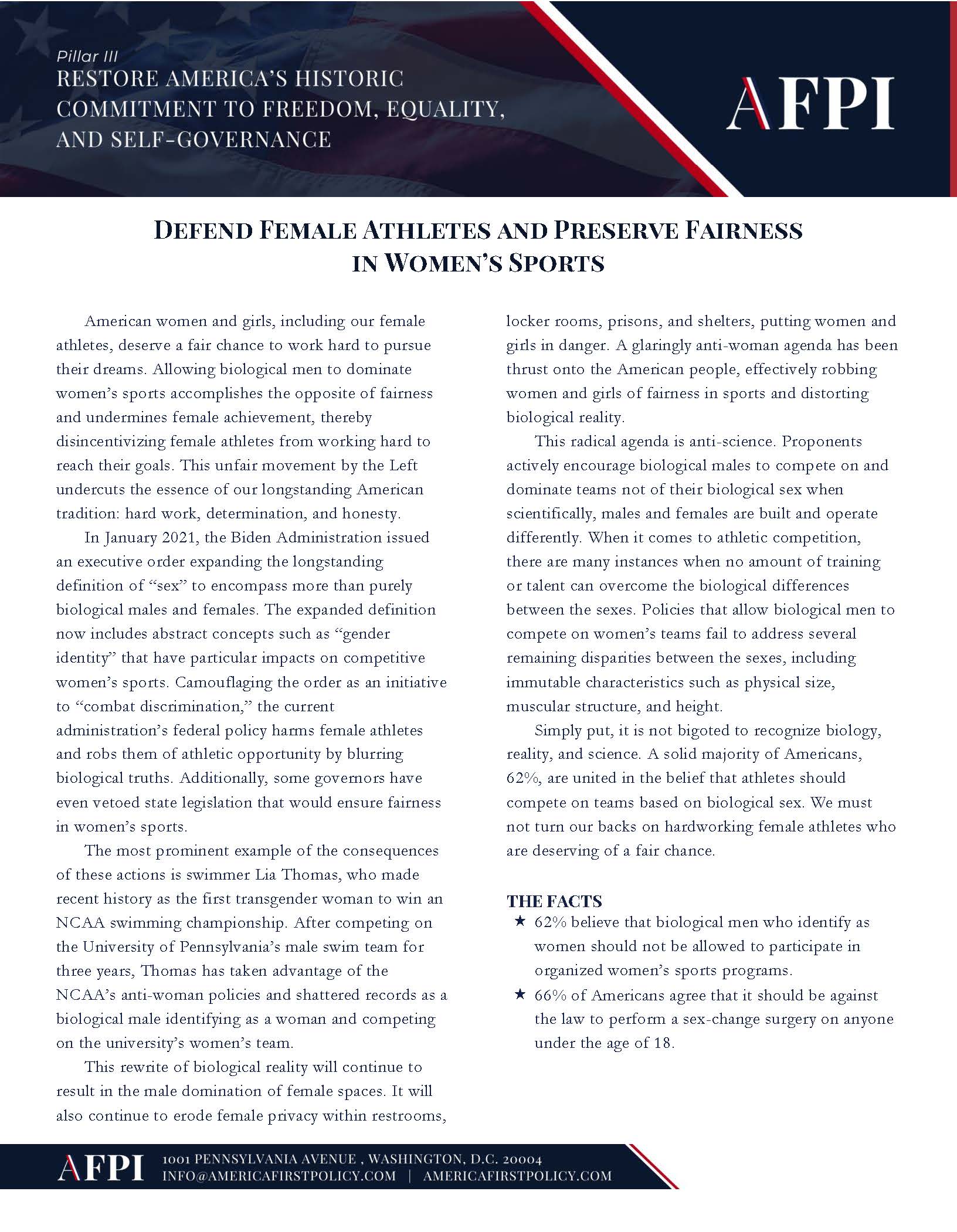 American women and girls, including our female athletes, deserve a fair chance to work hard to pursue their dreams. Allowing biological men to dominate women’s sports accomplishes the opposite of fairness and undermines female achievement, thereby disincentivizing female athletes from working hard to reach their goals. This unfair movement by the Left undercuts the essence of our longstanding American tradition: hard work, determination, and honesty.

In January 2021, the Biden Administration issued an executive order expanding the longstanding definition of “sex” to encompass more than purely biological males and females. The expanded definition now includes abstract concepts such as “gender identity” that have particular impacts on competitive women’s sports. Camouflaging the order as an initiative to “combat discrimination,” the current administration’s federal policy harms female athletes and robs them of athletic opportunity by blurring biological truths. Additionally, some governors have even vetoed state legislation that would ensure fairness in women’s sports.

The most prominent example of the consequences of these actions is swimmer Lia Thomas, who made recent history as the first transgender woman to win an NCAA swimming championship. After competing on the University of Pennsylvania’s male swim team for three years, Thomas has taken advantage of the NCAA’s anti-woman policies and shattered records as a biological male identifying as a woman and competing on the university’s women’s team.

This rewrite of biological reality will continue to result in the male domination of female spaces. It will also continue to erode female privacy within restrooms, locker rooms, prisons, and shelters, putting women and girls in danger. A glaringly anti-woman agenda has been thrust onto the American people, effectively robbing women and girls of fairness in sports and distorting biological reality.

This radical agenda is anti-science. Proponents actively encourage biological males to compete on and dominate teams not of their biological sex when scientifically, males and females are built and operate differently. When it comes to athletic competition, there are many instances when no amount of training or talent can overcome the biological differences between the sexes. Policies that allow biological men to compete on women’s teams fail to address several remaining disparities between the sexes, including immutable characteristics such as physical size, muscular structure, and height.

Simply put, it is not bigoted to recognize biology, reality, and science. A solid majority of Americans, 62%,
are united in the belief that athletes should compete on teams based on biological sex. We must not turn our backs on hardworking female athletes who are deserving of a fair chance.

Executive Order on Preventing and Combating Discrimination on the Basis of Gender Identity or Sexual Orientation, The White House (Jan. 2021).