Honor the Sanctity of Every Innocent Human Life 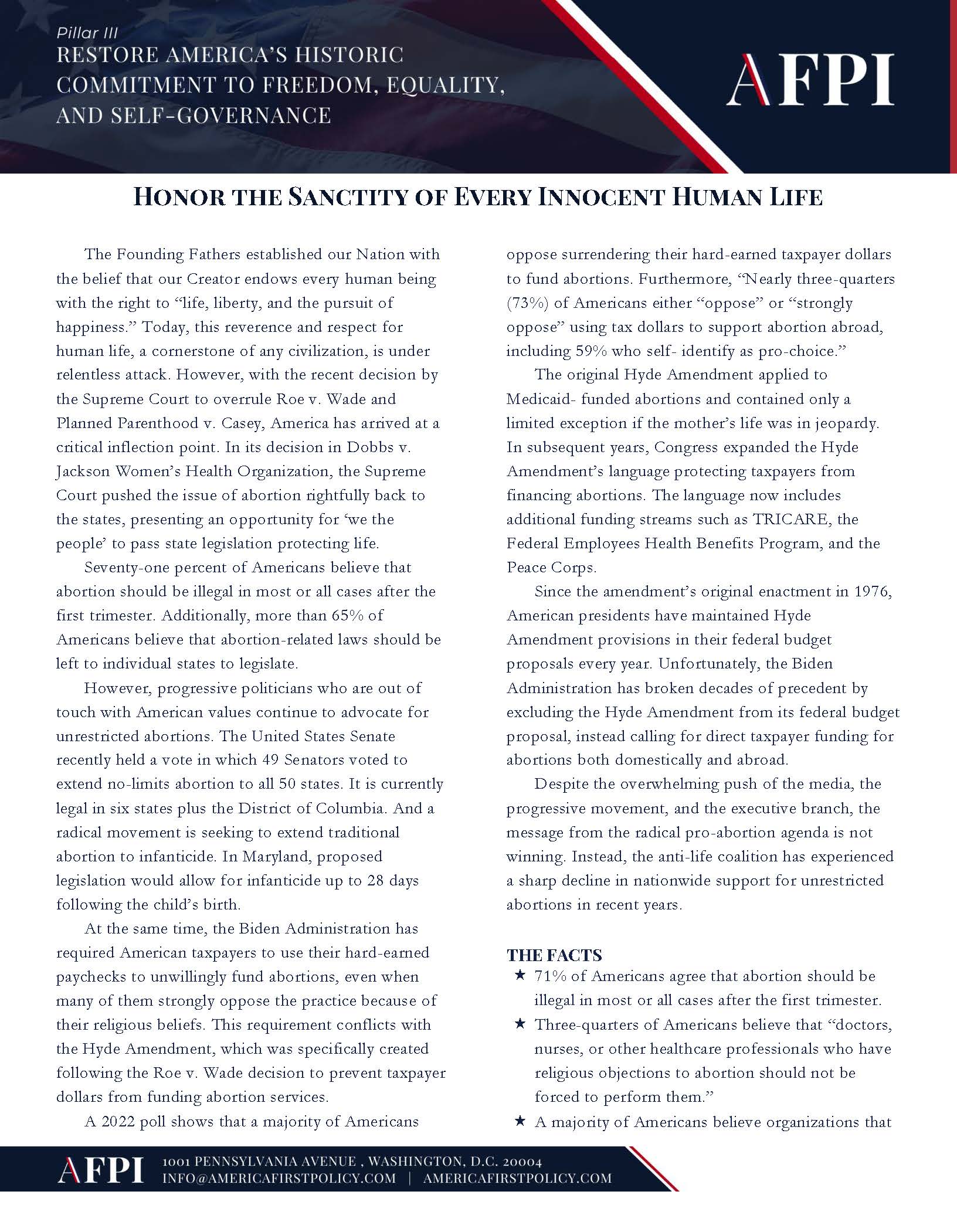 The Founding Fathers established our Nation with the belief that our Creator endows every human being with the right to “life, liberty, and the pursuit of happiness.” Today, this reverence and respect for human life, a cornerstone of any civilization, is under relentless attack. However, with the recent decision by the Supreme Court to overrule Roe v. Wade and Planned Parenthood v. Casey, America has arrived at a critical inflection point. In its decision in Dobbs v. Jackson Women’s Health Organization, the Supreme Court pushed the issue of abortion rightfully back to the states, presenting an opportunity for ‘we the people’ to pass state legislation protecting life.

However, progressive politicians who are out of touch with American values continue to advocate for unrestricted abortions. The United States Senate recently held a vote in which 49 Senators voted to extend no-limits abortion to all 50 states. It is currently legal in six states plus the District of Columbia. And a radical movement is seeking to extend traditional abortion to infanticide. In Maryland, proposed legislation would allow for infanticide up to 28 days following the child’s birth.

At the same time, the Biden Administration has required American taxpayers to use their hard-earned paychecks to unwillingly fund abortions, even when many of them strongly oppose the practice because of their religious beliefs. This requirement conflicts with the Hyde Amendment, which was specifically created following the Roe v. Wade decision to prevent taxpayer dollars from funding abortion services.

A 2022 poll shows that a majority of Americans oppose surrendering their hard-earned taxpayer dollars to fund abortions. Furthermore, “Nearly three-quarters (73%) of Americans either “oppose” or “strongly oppose” using tax dollars to support abortion abroad, including 59% who self- identify as pro-choice.”

The original Hyde Amendment applied to Medicaid- funded abortions and contained only a limited exception
if the mother’s life was in jeopardy. In subsequent years, Congress expanded the Hyde Amendment’s language protecting taxpayers from financing abortions. The language now includes additional funding streams such as TRICARE, the Federal Employees Health Benefits Program, and the Peace Corps.

Since the amendment’s original enactment in 1976, American presidents have maintained Hyde Amendment provisions in their federal budget proposals every year. Unfortunately, the Biden Administration has broken decades of precedent by excluding the Hyde Amendment from its federal budget proposal, instead calling for direct taxpayer funding for abortions both domestically and abroad.

Despite the overwhelming push of the media, the progressive movement, and the executive branch, the message from the radical pro-abortion agenda is not winning. Instead, the anti-life coalition has experienced a sharp decline in nationwide support for unrestricted abortions in recent years.

Op-Ed: We should all be able to agree on equality by Brooke Rollins and Pastor Paula White-Cain, The Washington Times (Jan. 2022).

The Evolution of “Self-Managed” Abortion: Does the Safety of Women Seeking Abortion Even Matter Anymore? by Ingrid Skop, M.D., Charlotte Lozier Institute (March 2022).