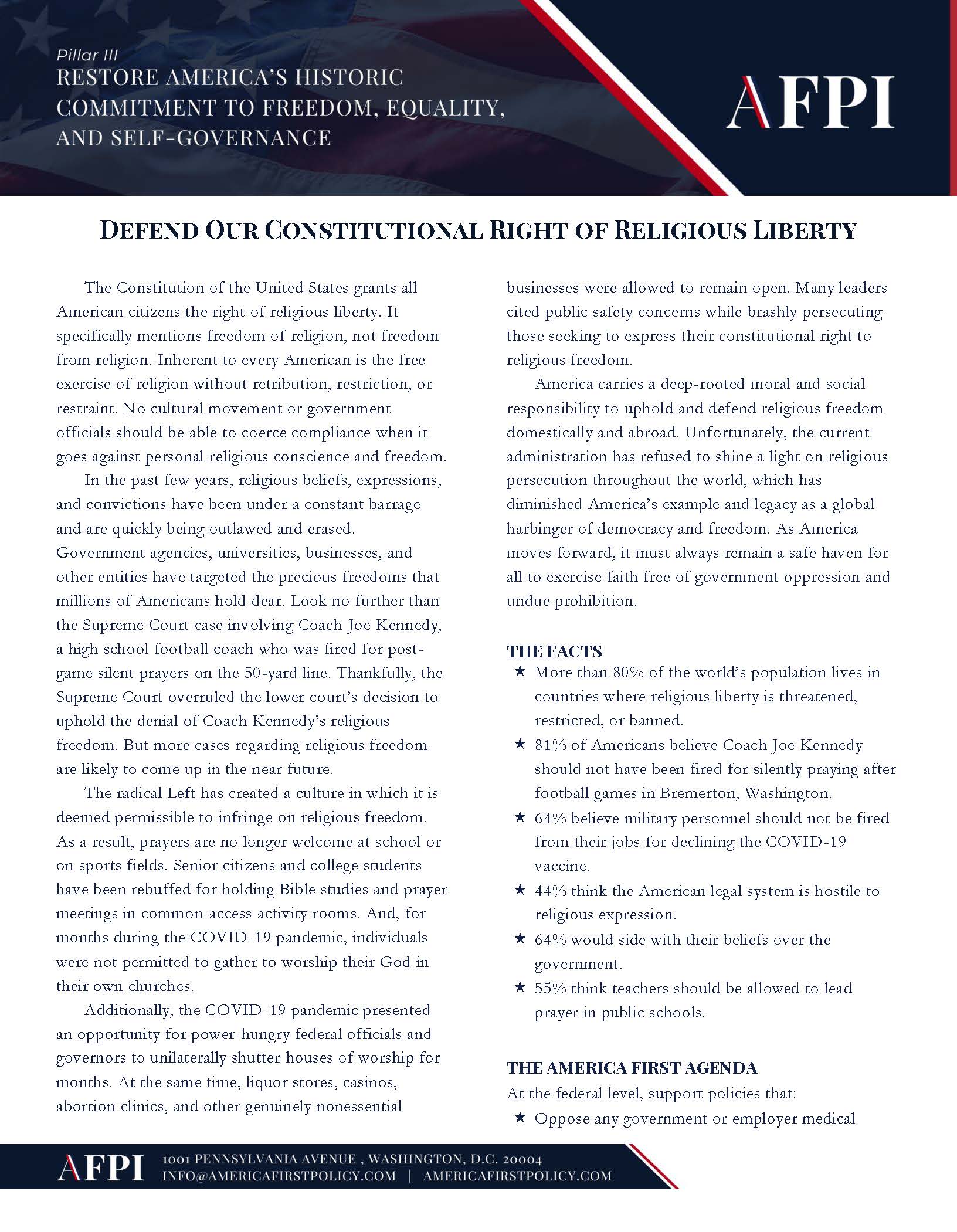 The Constitution of the United States grants all American citizens the right of religious liberty. It specifically mentions freedom of religion, not freedom from religion. Inherent to every American is the free exercise of religion without retribution, restriction, or restraint. No cultural movement or government officials should be able to coerce compliance when it goes against personal religious conscience and freedom.

In the past few years, religious beliefs, expressions, and convictions have been under a constant barrage and are quickly being outlawed and erased. Government agencies, universities, businesses, and other entities have targeted the precious freedoms that millions of Americans hold dear. Look no further than the Supreme Court case involving Coach Joe Kennedy, a high school football coach who was fired for post-game silent prayers on the 50-yard line. Thankfully, the Supreme Court overruled the lower court’s decision to uphold the denial of Coach Kennedy’s religious freedom. But more cases regarding religious freedom are likely to come up in the near future.

The radical Left has created a culture in which it is deemed permissible to infringe on religious freedom. As a result, prayers are no longer welcome at school or on sports fields. Senior citizens and college students have been rebuffed for holding Bible studies and prayer meetings in common-access activity rooms. And, for months during the COVID-19 pandemic, individuals were not permitted to gather to worship their God in their own churches.

Additionally, the COVID-19 pandemic presented an opportunity for power-hungry federal officials and governors to unilaterally shutter houses of worship for months. At the same time, liquor stores, casinos, abortion clinics, and other genuinely nonessential businesses were allowed to remain open. Many leaders cited public safety concerns while brashly persecuting those seeking to express their constitutional right to religious freedom. America carries a deep-rooted moral and social

responsibility to uphold and defend religious freedom domestically and abroad. Unfortunately, the current administration has refused to shine a light on religious persecution throughout the world, which has diminished America’s example and legacy as a global harbinger of democracy and freedom. As America moves forward, it must always remain a safe haven for all to exercise faith free of government oppression and undue prohibition.