Defend Our Constitutional Right to Keep and Bear Arms 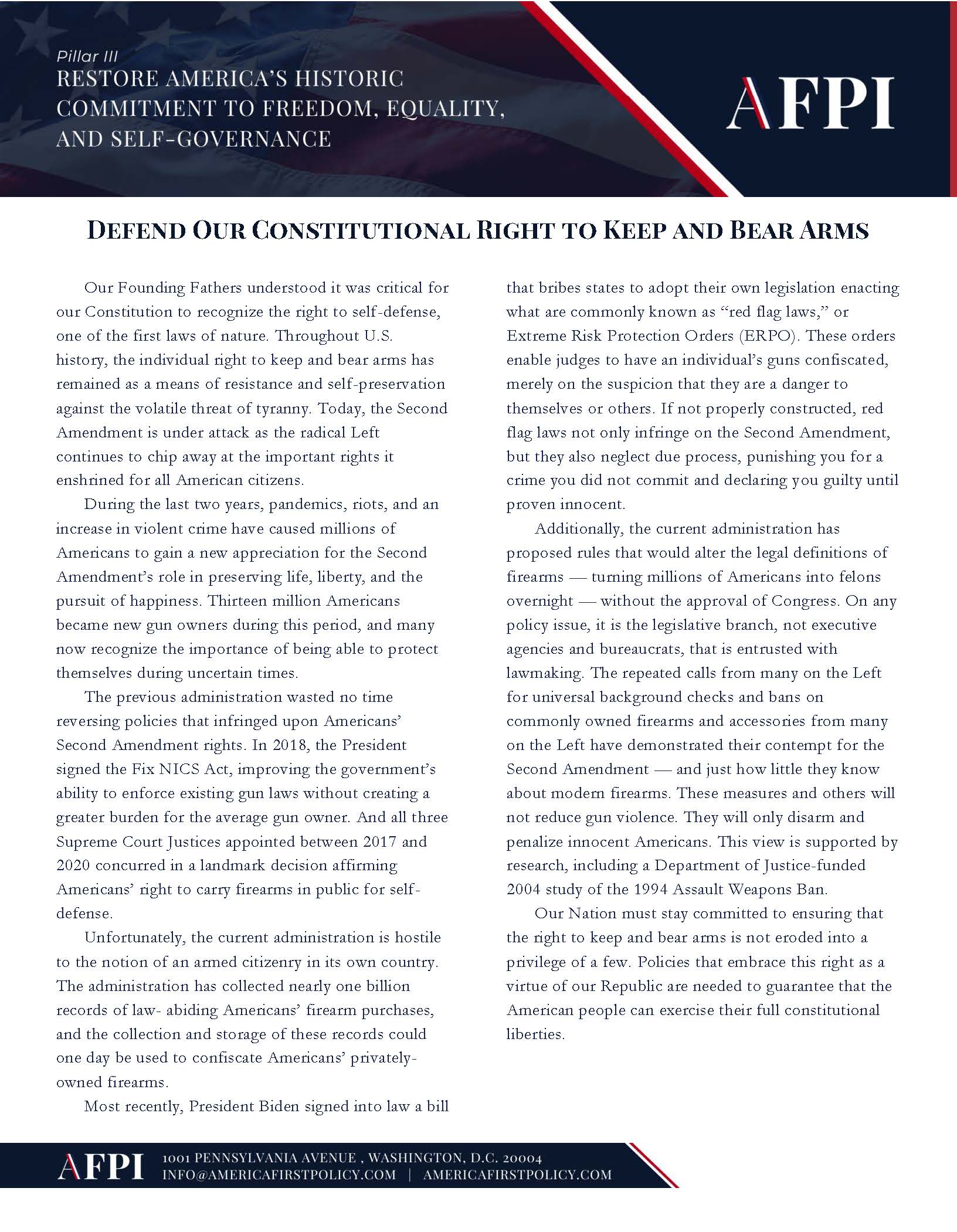 Our Founding Fathers understood it was critical for our Constitution to recognize the right to self-defense, one of the first laws of nature. Throughout U.S. history, the individual right to keep and bear arms has remained as a means of resistance and self-preservation against the volatile threat of tyranny. Today, the Second Amendment is under attack as the radical Left continues to chip away at the important rights it enshrined for all American citizens.

During the last two years, pandemics, riots, and an increase in violent crime have caused millions of Americans to gain a new appreciation for the Second Amendment’s role in preserving life, liberty, and the pursuit of happiness. Thirteen million Americans became new gun owners during this period, and many now recognize the importance of being able to protect themselves during uncertain times.

The previous administration wasted no time reversing policies that infringed upon Americans’ Second Amendment rights. In 2018, the President signed the Fix NICS Act, improving the government’s ability to enforce existing gun laws without creating a greater burden for the average gun owner. And all three Supreme Court Justices appointed between 2017 and 2020 concurred in a landmark decision affirming Americans’ right to carry firearms in public for self-defense. Unfortunately, the current administration is hostile to the notion of an armed citizenry in its own country. The administration has collected nearly one billion records of law-abiding Americans’ firearm purchases, and the collection and storage of these records could one day be used to confiscate Americans’ privately-owned firearms.

Most recently, President Biden signed into law a bill that bribes states to adopt their own legislation enacting what are commonly known as “red flag laws,” or Extreme Risk Protection Orders (ERPO). These orders enable judges to have an individual’s guns confiscated, merely on the suspicion that they are a danger to themselves or others. If not properly constructed, red flag laws not only infringe on the Second Amendment, but they also neglect due process, punishing you for a crime you did not commit and declaring you guilty until proven innocent.

Additionally, the current administration has proposed rules that would alter the legal definitions of firearms — turning millions of Americans into felons overnight — without the approval of Congress. On any policy issue, it is the legislative branch, not executive agencies and bureaucrats, that is entrusted with lawmaking. The repeated calls from many on the Left for universal background checks and bans on commonly owned firearms and accessories from many on the Left have demonstrated their contempt for the Second Amendment — and just how little they know about modern firearms. These measures and others will not reduce gun violence. They will only disarm and penalize innocent Americans. This view is supported by research, including a Department of Justice-funded 2004 study of the 1994 Assault Weapons Ban.

Our Nation must stay committed to ensuring that the right to keep and bear arms is not eroded into a privilege of a few. Policies that embrace this right as a virtue of our Republic are needed to guarantee that the American people can exercise their full constitutional liberties.

Gun Crimes Grab Most Media Attention, While Gun Use in Self-Defense Gets Merely a Fraction: Experts by Emma Coulton, Fox News (Feb. 2022).

One in Five American Households Purchased a Gun During the Pandemic, NORC at the University of Chicago (March 2022).

Priorities for Research to Reduce the Threat of Firearm-Related Violence, Institute of Medicine and National Research Council of The National Academies (2013).