Address Homelessness and Mental Health Issues that are Plaguing Our Streets 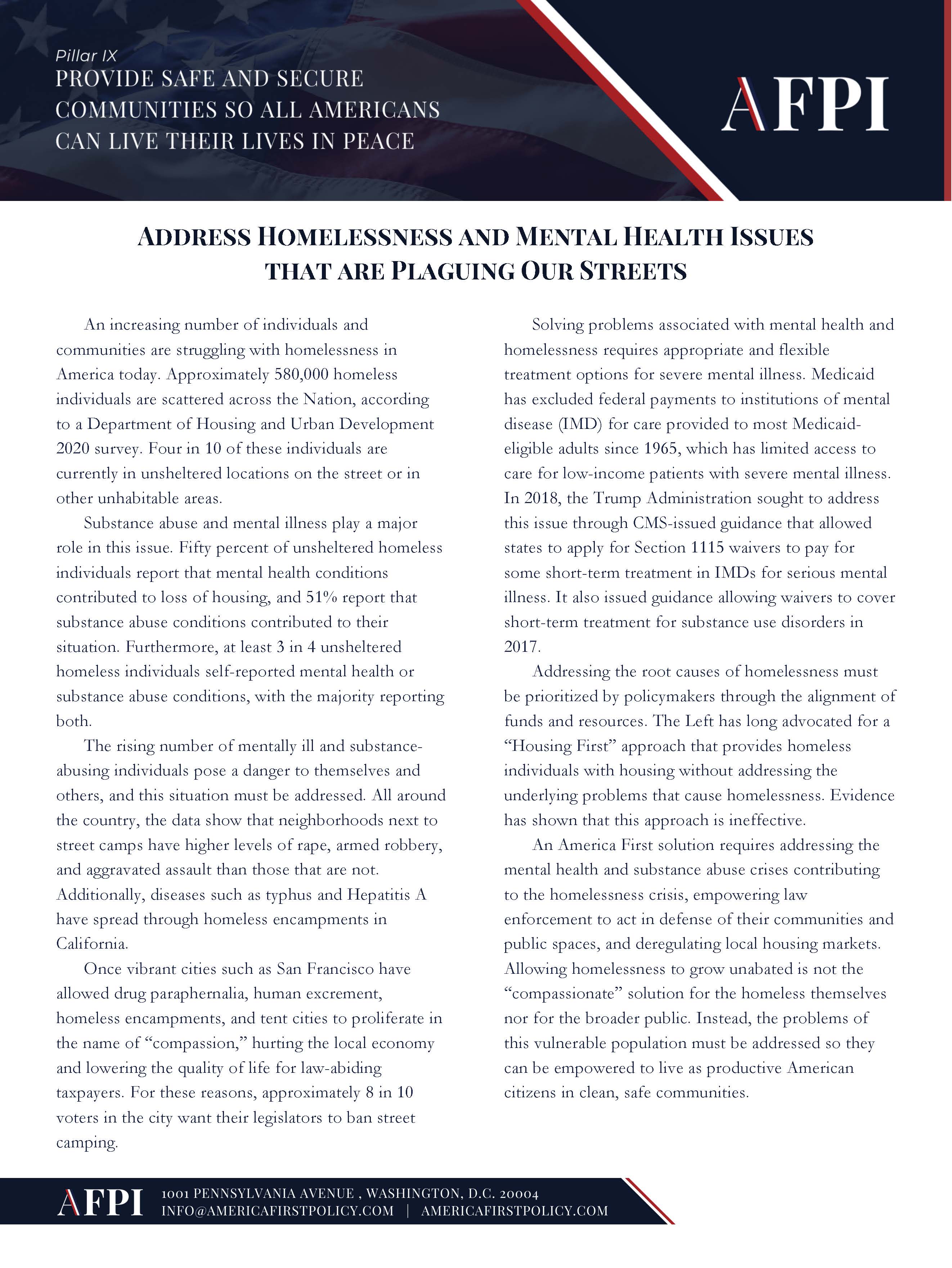 An increasing number of individuals and communities are struggling with homelessness in America today. Approximately 580,000 homeless individuals are scattered across the Nation, according to a Department of Housing and Urban Development 2020 survey. Four in 10 of these individuals are currently in unsheltered locations on the street or in other unhabitable areas.

The rising number of mentally ill and substance- abusing individuals pose a danger to themselves and others, and this situation must be addressed. All around the country, the data show that neighborhoods next to street camps have higher levels of rape, armed robbery, and aggravated assault than those that are not. Additionally, diseases such as typhus and Hepatitis A have spread through homeless encampments in California.

Once vibrant cities such as San Francisco have allowed drug paraphernalia, human excrement, homeless encampments, and tent cities to proliferate in the name of “compassion,” hurting the local economy and lowering the quality of life for law-abiding taxpayers. For these reasons, approximately 8 in 10 voters in the city want their legislators to ban street camping.

Solving problems associated with mental health and homelessness requires appropriate and flexible treatment options for severe mental illness. Medicaid has excluded federal payments to institutions of mental disease (IMD) for care provided to most Medicaid-eligible adults since 1965, which has limited access to care for low-income patients with severe mental illness. In 2018, the Trump Administration sought to address this issue through CMS-issued guidance that allowed states to apply for Section 1115 waivers to pay for some short-term treatment in IMDs for serious mental illness. It also issued guidance allowing waivers to cover short-term treatment for substance use disorders in 2017.

Addressing the root causes of homelessness must be prioritized by policymakers through the alignment of funds and resources. The Left has long advocated for a “Housing First” approach that provides homeless individuals with housing without addressing the underlying problems that cause homelessness. Evidence has shown that this approach is ineffective.

An America First solution requires addressing the mental health and substance abuse crises contributing to the homelessness crisis, empowering law enforcement to act in defense of their communities and public spaces, and deregulating local housing markets. Allowing homelessness to grow unabated is not the “compassionate” solution for the homeless themselves nor for the broader public. Instead, the problems of this vulnerable population must be addressed so they can be empowered to live as productive American citizens in clean, safe communities.

Housing First is a Failure by Judge Glock, The Cicero Institute (Jan. 2022).

SMD # 18—011 RE: Opportunities to Design Innovative Service Delivery Systems for Adults with a Serious Mental Illness or Children with a Serious Emotional Disturbance, Centers for Medicare & Medicaid Services, U.S. Department of Health and Human Services (Nov. 2018).

The “Housing First” Approach Has Failed: Time to Reform Federal Policy and Make it Work for Homeless Americans by Christopher Rufo, The Heritage Foundation (Aug. 2020).

The State of Homelessness in America, Council of Economic Advisers, Executive Office of the President (Sept. 2019).