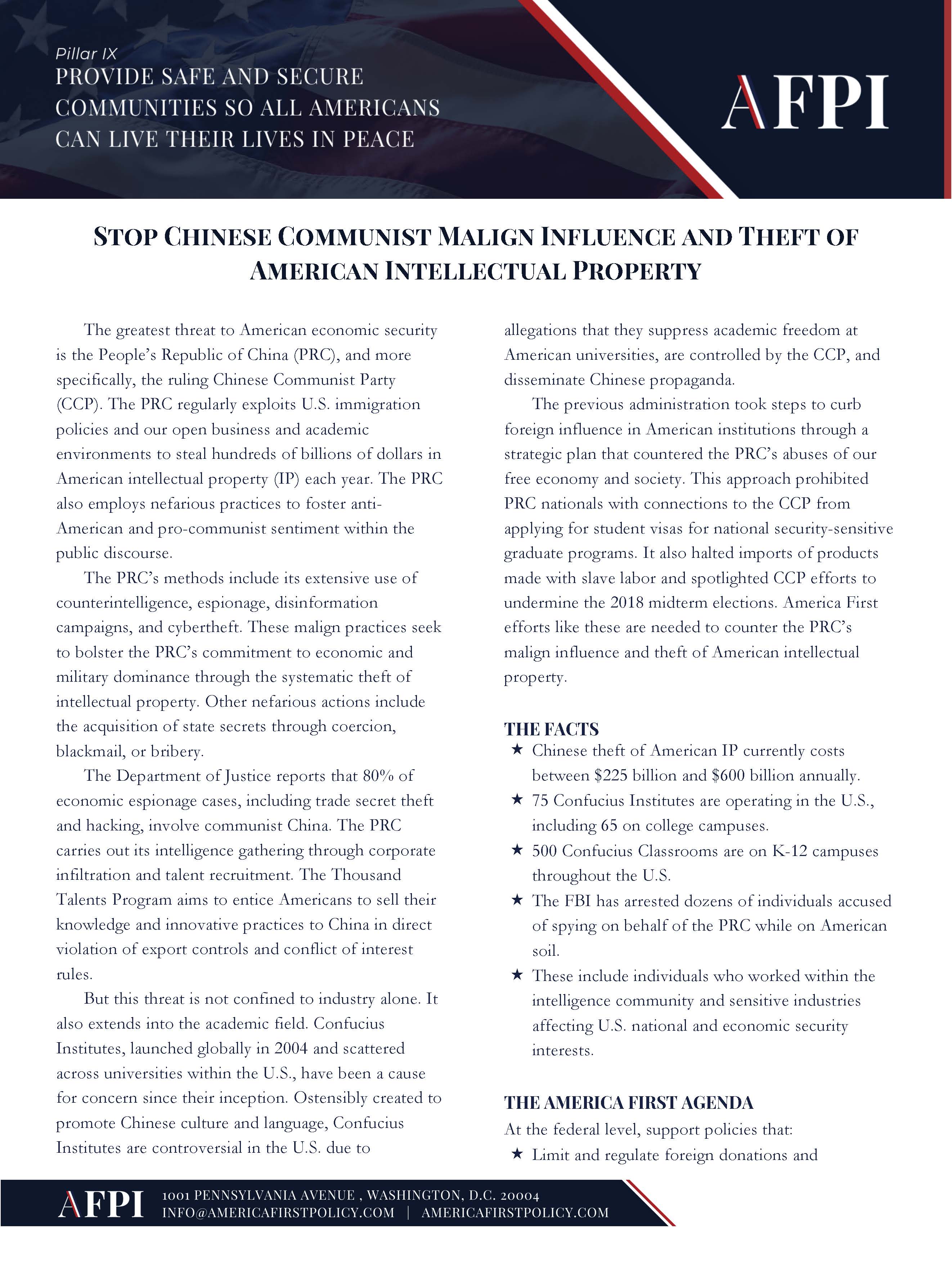 The greatest threat to American economic security is the People’s Republic of China (PRC), and more specifically, the ruling Chinese Communist Party (CCP). The PRC regularly exploits U.S. immigration policies and our open business and academic environments to steal hundreds of billions of dollars in American intellectual property (IP) each year. The PRC also employs nefarious practices to foster anti-American and pro-communist sentiment within the public discourse.

The PRC’s methods include its extensive use of counterintelligence, espionage, disinformation campaigns, and cybertheft. These malign practices seek to bolster the PRC’s commitment to economic and military dominance through the systematic theft of intellectual property. Other nefarious actions include the acquisition of state secrets through coercion, blackmail, or bribery.

The Department of Justice reports that 80% of economic espionage cases, including trade secret theft and hacking, involve communist China. The PRC carries out its intelligence gathering through corporate infiltration and talent recruitment. The Thousand Talents Program aims to entice Americans to sell their knowledge and innovative practices to China in direct violation of export controls and conflict of interest rules.

But this threat is not confined to industry alone. It also extends into the academic field. Confucius Institutes, launched globally in 2004 and scattered across universities within the U.S., have been a cause for concern since their inception. Ostensibly created to promote Chinese culture and language, Confucius Institutes are controversial in the U.S. due to allegations that they suppress academic freedom at American universities, are controlled by the CCP, and disseminate Chinese propaganda.

The previous administration took steps to curb foreign influence in American institutions through a strategic plan that countered the PRC’s abuses of our free economy and society. This approach prohibited PRC nationals with connections to the CCP from applying for student visas for national security-sensitive graduate programs. It also halted imports of products made with slave labor and spotlighted CCP efforts to undermine the 2018 midterm elections. America First efforts like these are needed to counter the PRC’s malign influence and theft of American intellectual property.

The Theft of American Intellectual Property: Reassessments of the Challenge and United States Policy, National Bureau of Asian Research (Feb. 2017).