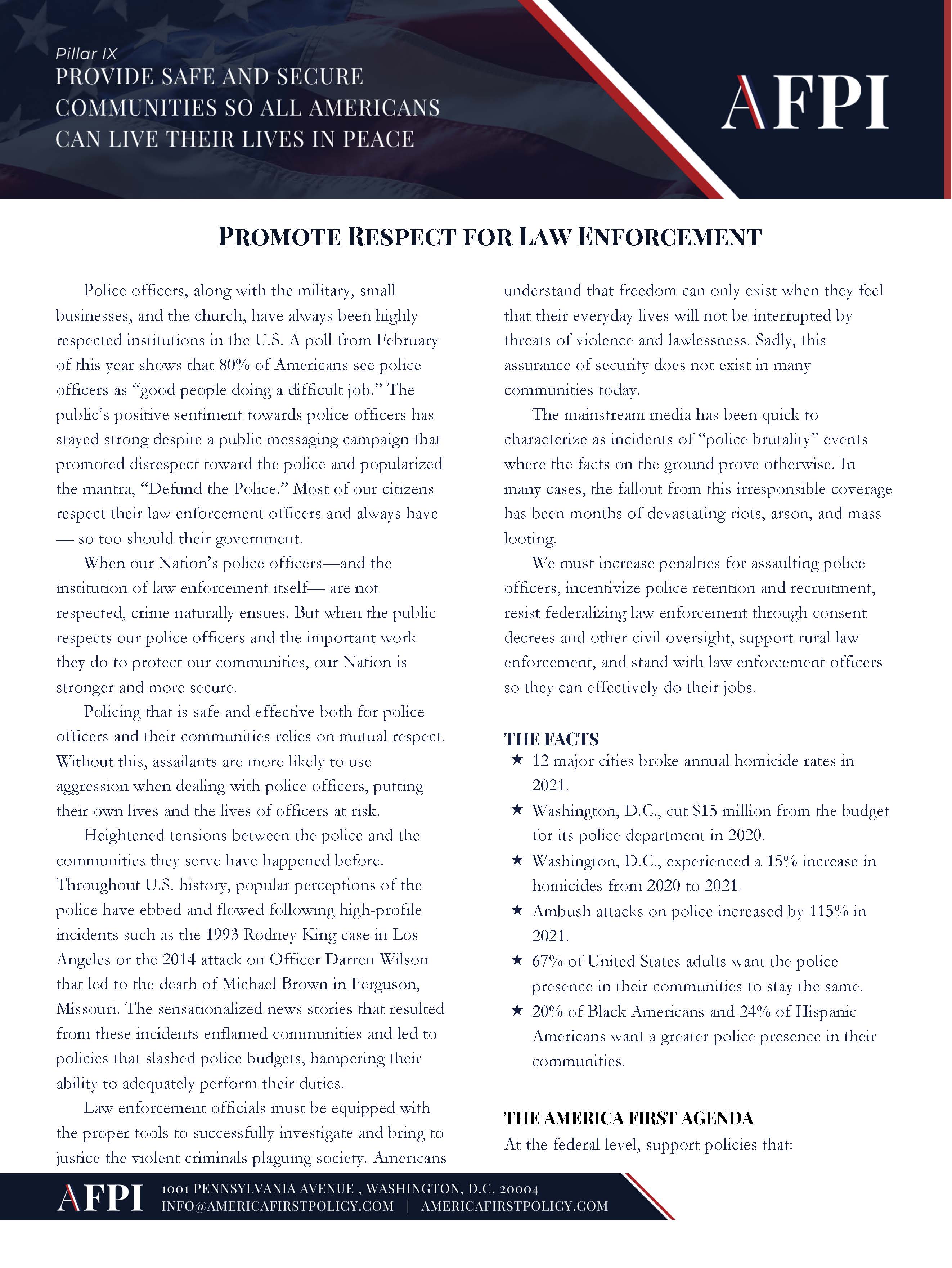 Police officers, along with the military, small businesses, and the church, have always been highly respected institutions in the U.S. A poll from February of this year shows that 80% of Americans see police officers as “good people doing a difficult job.” The public’s positive sentiment towards police officers has stayed strong despite a public messaging campaign that promoted disrespect toward the police and popularized the mantra, “Defund the Police.” Most of our citizens respect their law enforcement officers and always have — so too should their government.

When our Nation’s police officers—and the institution of law enforcement itself— are not respected, crime naturally ensues. But when the public respects our police officers and the important work they do to protect our communities, our Nation is stronger and more secure.

Policing that is safe and effective both for police officers and their communities relies on mutual respect. Without this, assailants are more likely to use aggression when dealing with police officers, putting their own lives and the lives of officers at risk.

Heightened tensions between the police and the communities they serve have happened before. Throughout U.S. history, popular perceptions of the police have ebbed and flowed following high-profile incidents such as the 1993 Rodney King case in Los Angeles or the 2014 attack on Officer Darren Wilson that led to the death of Michael Brown in Ferguson, Missouri. The sensationalized news stories that resulted from these incidents enflamed communities and led to policies that slashed police budgets, hampering their ability to adequately perform their duties.

Law enforcement officials must be equipped with the proper tools to successfully investigate and bring to justice the violent criminals plaguing society. Americans understand that freedom can only exist when they feel that their everyday lives will not be interrupted by threats of violence and lawlessness. Sadly, this assurance of security does not exist in many communities today.

The mainstream media has been quick to characterize as incidents of “police brutality” events where the facts on the ground prove otherwise. In many cases, the fallout from this irresponsible coverage has been months of devastating riots, arson, and mass looting.

We must increase penalties for assaulting police officers, incentivize police retention and recruitment, resist federalizing law enforcement through consent decrees and other civil oversight, support rural law enforcement, and stand with law enforcement officers so they can effectively do their jobs.

No Law and No Order, the Policies of the Left by Troup Hemenway, America First Policy Institute (Dec. 14, 2021).

Supporting America’s Heroes Who Continue to Hold the Line – In Spite of It All by Pam Bondi and Matt Whitaker, America First Policy Institute (Dec. 6, 2021).