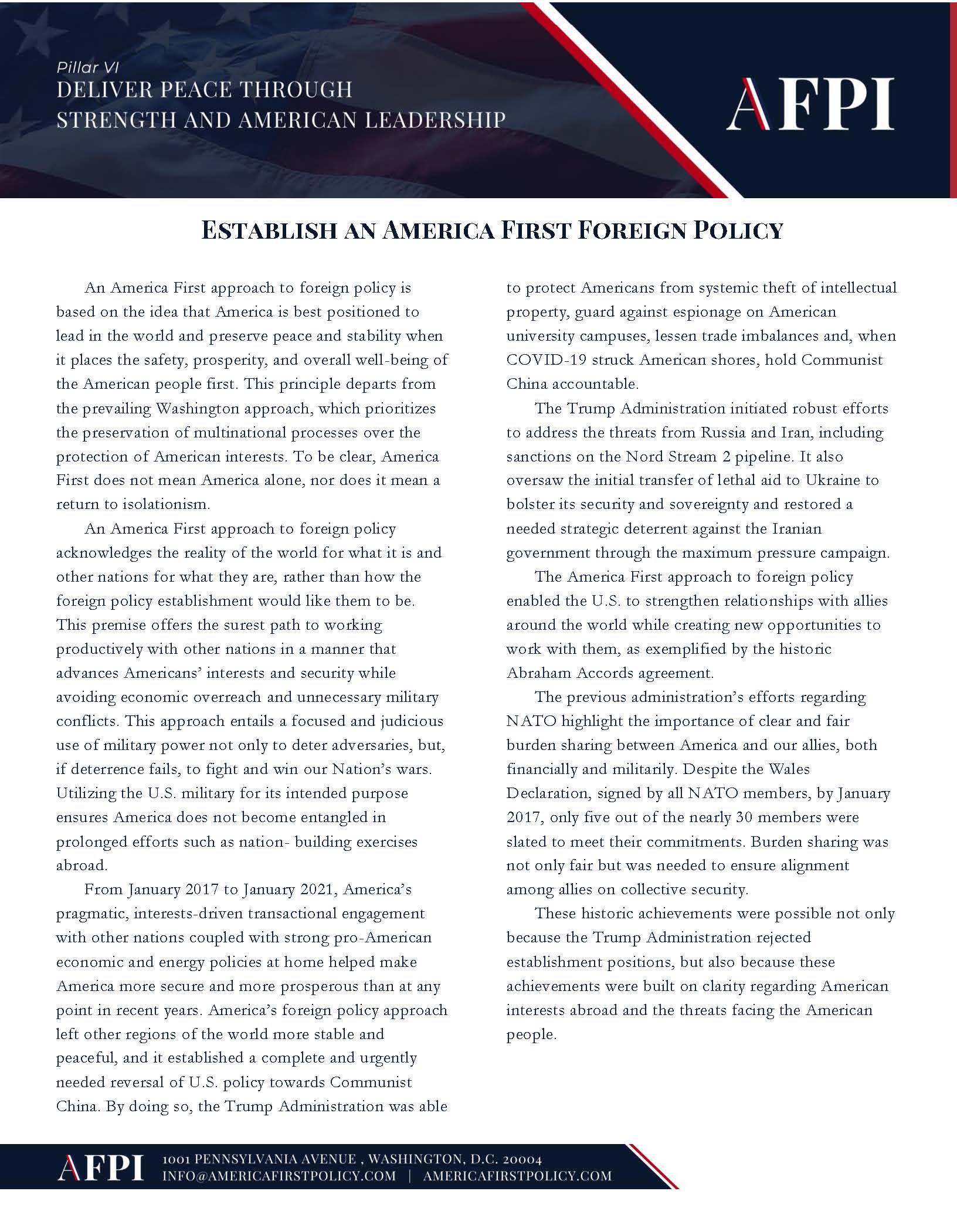 An America First approach to foreign policy is based on the idea that America is best positioned to lead in the world and preserve peace and stability when it places the safety, prosperity, and overall well-being of the American people first. This principle departs from the prevailing Washington approach, which prioritizes the preservation of multinational processes over the protection of American interests. To be clear, America First does not mean America alone, nor does it mean a return to isolationism.

An America First approach to foreign policy acknowledges the reality of the world for what it is and other nations for what they are, rather than how the foreign policy establishment would like them to be. This premise offers the surest path to working productively with other nations in a manner that advances Americans’ interests and security while avoiding economic overreach and unnecessary military conflicts. This approach entails a focused and judicious use of military power not only to deter adversaries, but, if deterrence fails, to fight and win our Nation’s wars. Utilizing the U.S. military for its intended purpose ensures America does not become entangled in prolonged efforts such as nation- building exercises abroad.

From January 2017 to January 2021, America’s pragmatic, interests-driven transactional engagement with other nations coupled with strong pro-American economic and energy policies at home helped make America more secure and more prosperous than at any point in recent years. America’s foreign policy approach left other regions of the world more stable and peaceful, and it established a complete and urgently needed reversal of U.S. policy towards Communist China. By doing so, the Trump Administration was able to protect Americans from systemic theft of intellectual property, guard against espionage on American university campuses, lessen trade imbalances and, when COVID-19 struck American shores, hold Communist China accountable. The Trump Administration initiated robust efforts to address the threats from Russia and Iran, including sanctions on the Nord Stream 2 pipeline. It also oversaw the initial transfer of lethal aid to Ukraine to bolster its security and sovereignty and restored a needed strategic deterrent against the Iranian government through the maximum pressure campaign.

The America First approach to foreign policy enabled the U.S. to strengthen relationships with allies around the world while creating new opportunities to work with them, as exemplified by the historic Abraham Accords agreement.

The previous administration’s efforts regarding NATO highlight the importance of clear and fair burden sharing between America and our allies, both financially and militarily. Despite the Wales Declaration, signed by all NATO members, by January 2017, only five out of the nearly 30 members were slated to meet their commitments. Burden sharing was not only fair but was needed to ensure alignment among allies on collective security.

AFPI on America’s Security and Standing in the World after Putin’s Invasion of Ukraine, America First Policy Institute (Feb. 2022).

Fear of Donald Trump Kept Putin from Invading Ukraine. Here’s How Trump Pulled It Off by John Ratcliffe and Cliff Sims, The Federalist (March 2022).

How the Left Is Using Ukraine to Discredit Trump and ‘America First’ by Fred Fleitz, American Greatness (March 2022).