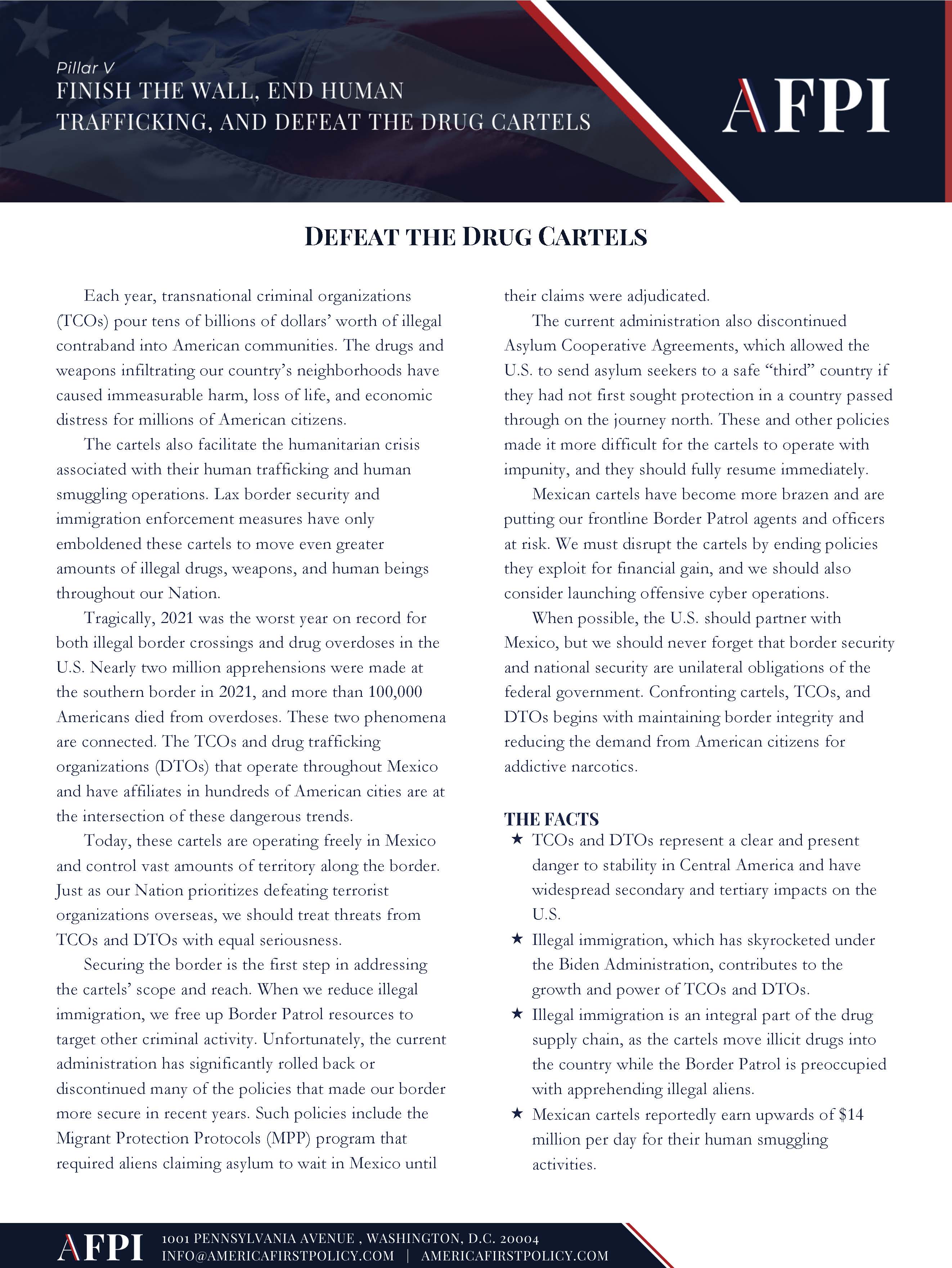 Each year, transnational criminal organizations (TCOs) pour tens of billions of dollars’ worth of illegal contraband into American communities. The drugs and weapons infiltrating our country’s neighborhoods have caused immeasurable harm, loss of life, and economic distress for millions of American citizens.

The cartels also facilitate the humanitarian crisis associated with their human trafficking and human smuggling operations. Lax border security and immigration enforcement measures have only emboldened these cartels to move even greater amounts of illegal drugs, weapons, and human beings throughout our Nation.

Tragically, 2021 was the worst year on record for both illegal border crossings and drug overdoses in the U.S. Nearly two million apprehensions were made at the southern border in 2021, and more than 100,000 Americans died from overdoses. These two phenomena are connected. The TCOs and drug trafficking organizations (DTOs) that operate throughout Mexico and have affiliates in hundreds of American cities are at the intersection of these dangerous trends. Today, these cartels are operating freely in Mexico and control vast amounts of territory along the border. Just as our Nation prioritizes defeating terrorist organizations overseas, we should treat threats from TCOs and DTOs with equal seriousness.

Securing the border is the first step in addressing the cartels’ scope and reach. When we reduce illegal immigration, we free up Border Patrol resources to target other criminal activity. Unfortunately, the current administration has significantly rolled back or discontinued many of the policies that made our border more secure in recent years. Such policies include the Migrant Protection Protocols (MPP) program that required aliens claiming asylum to wait in Mexico until their claims were adjudicated. The current administration also discontinued Asylum Cooperative Agreements, which allowed the U.S. to send asylum seekers to a safe “third” country if they had not first sought protection in a country passed through on the journey north. These and other policies made it more difficult for the cartels to operate with impunity, and they should fully resume immediately.

Mexican cartels have become more brazen and are putting our frontline Border Patrol agents and officers at risk. We must disrupt the cartels by ending policies they exploit for financial gain, and we should also consider launching offensive cyber operations.

When possible, the U.S. should partner with Mexico, but we should never forget that border security and national security are unilateral obligations of the federal government. Confronting cartels, TCOs, and DTOs begins with maintaining border integrity and reducing the demand from American citizens for addictive narcotics.

The Case for an “America First” Approach to Homeland Security and Immigration, America First Policy Institute (May 2021).