Modernize and Restore Integrity to the Immigration System 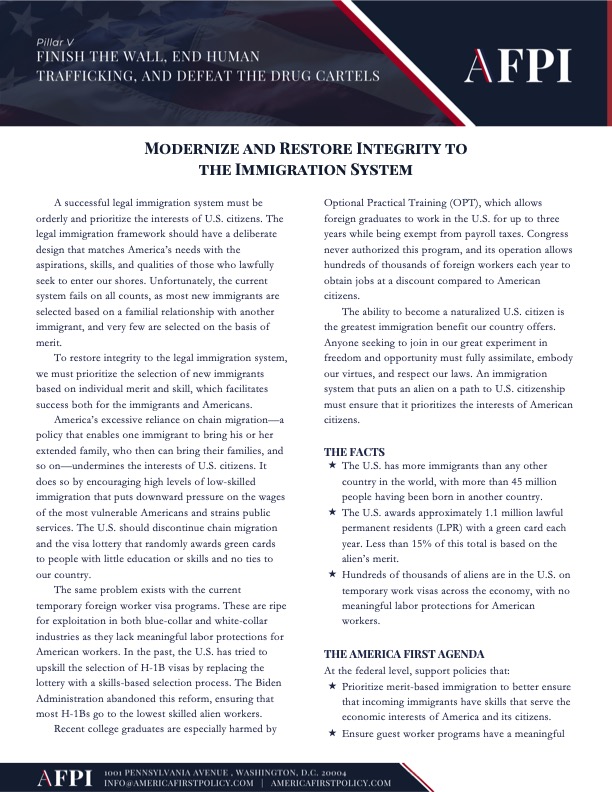 A successful legal immigration system must be orderly and prioritize the interests of U.S. citizens. The legal immigration framework should have a deliberate design that matches America’s needs with the aspirations, skills, and qualities of those who lawfully seek to enter our shores. Unfortunately, the current system fails on all counts, as most new immigrants are selected based on a familial relationship with another immigrant, and very few are selected on the basis of merit.

To restore integrity to the legal immigration system, we must prioritize the selection of new immigrants based on individual merit and skill, which facilitates success both for the immigrants and Americans.

America’s excessive reliance on chain migration—a policy that enables one immigrant to bring his or her extended family, who then can bring their families, and so on—undermines the interests of U.S. citizens. It does so by encouraging high levels of low-skilled immigration that puts downward pressure on the wages of the most vulnerable Americans and strains public services. The U.S. should discontinue chain migration and the visa lottery that randomly awards green cards to people with little education or skills and no ties to our country.

The same problem exists with the current temporary foreign worker visa programs. These are ripe for exploitation in both blue-collar and white-collar industries as they lack meaningful labor protections for American workers. In the past, the U.S. has tried to upskill the selection of H-1B visas by replacing the lottery with a skills-based selection process. The Biden Administration abandoned this reform, ensuring that most H-1Bs go to the lowest skilled alien workers.

Recent college graduates are especially harmed by Optional Practical Training (OPT), which allows foreign graduates to work in the U.S. for up to three years while being exempt from payroll taxes. Congress never authorized this program, and its operation allows hundreds of thousands of foreign workers each year to obtain jobs at a discount compared to American citizens.

The ability to become a naturalized U.S. citizen is the greatest immigration benefit our country offers. Anyone seeking to join in our great experiment in freedom and opportunity must fully assimilate, embody our virtues, and respect our laws. An immigration system that puts an alien on a path to U.S. citizenship must ensure that it prioritizes the interests of American citizens.