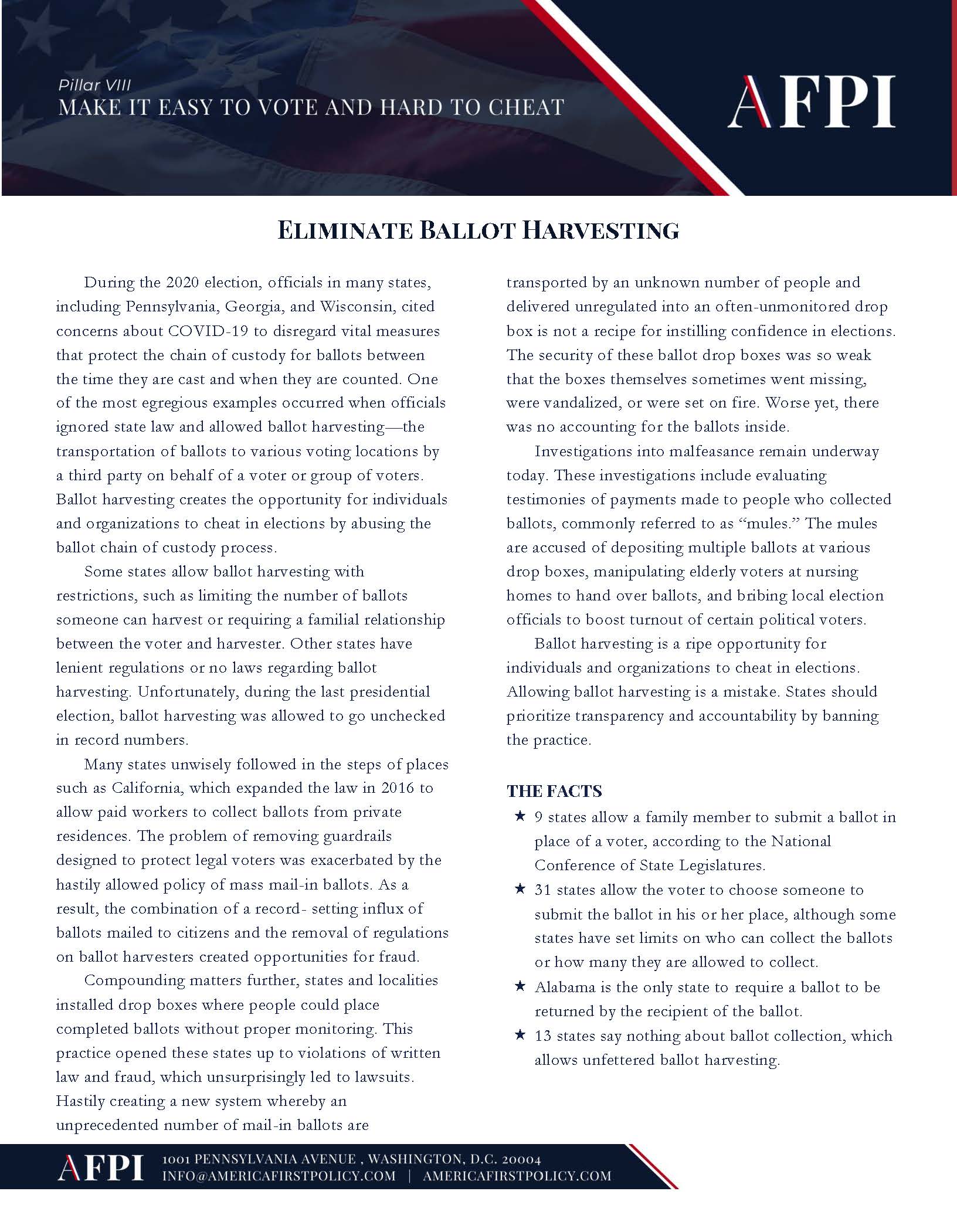 During the 2020 election, officials in many states, including Pennsylvania, Georgia, and Wisconsin, cited concerns about COVID-19 to disregard vital measures that protect the chain of custody for ballots between the time they are cast and when they are counted. One of the most egregious examples occurred when officials ignored state law and allowed ballot harvesting—the transportation of ballots to various voting locations by a third party on behalf of a voter or group of voters. Ballot harvesting creates the opportunity for individuals and organizations to cheat in elections by abusing the ballot chain of custody process.

Some states allow ballot harvesting with restrictions, such as limiting the number of ballots someone can harvest or requiring a familial relationship between the voter and harvester. Other states have lenient regulations or no laws regarding ballot harvesting. Unfortunately, during the last presidential election, ballot harvesting was allowed to go unchecked in record numbers.

Many states unwisely followed in the steps of places such as California, which expanded the law in 2016 to allow paid workers to collect ballots from private residences. The problem of removing guardrails designed to protect legal voters was exacerbated by the hastily allowed policy of mass mail-in ballots. As a result, the combination of a record- setting influx of ballots mailed to citizens and the removal of regulations on ballot harvesters created opportunities for fraud.

Compounding matters further, states and localities installed drop boxes where people could place completed ballots without proper monitoring. This practice opened these states up to violations of written law and fraud, which unsurprisingly led to lawsuits. Hastily creating a new system whereby an unprecedented number of mail-in ballots are transported by an unknown number of people and delivered unregulated into an often-unmonitored drop box is not a recipe for instilling confidence in elections. The security of these ballot drop boxes was so weak that the boxes themselves sometimes went missing, were vandalized, or were set on fire. Worse yet, there was no accounting for the ballots inside.

Investigations into malfeasance remain underway today. These investigations include evaluating testimonies of payments made to people who collected ballots, commonly referred to as “mules.” The mules are accused of depositing multiple ballots at various drop boxes, manipulating elderly voters at nursing homes to hand over ballots, and bribing local election officials to boost turnout of certain political voters.