Stop Big Tech from Encroaching on Our Free Speech 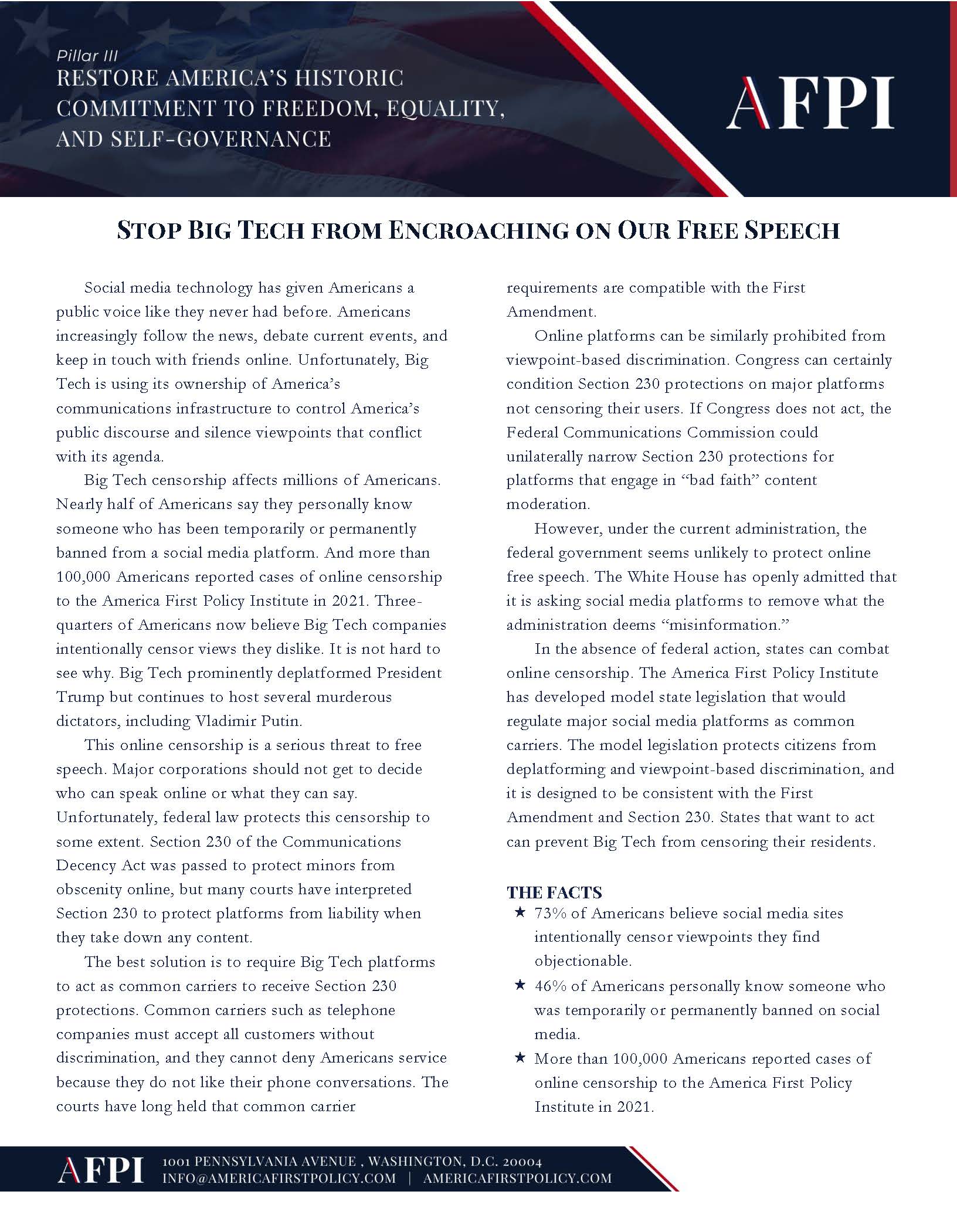 Social media technology has given Americans a public voice like they never had before. Americans increasingly follow the news, debate current events, and keep in touch with friends online. Unfortunately, Big Tech is using its ownership of America’s communications infrastructure to control America’s public discourse and silence viewpoints that conflict with its agenda.

Big Tech censorship affects millions of Americans. Nearly half of Americans say they personally know someone who has been temporarily or permanently banned from a social media platform. And more than 100,000 Americans reported cases of online censorship to the America First Policy Institute in 2021. Three-quarters of Americans now believe Big Tech companies intentionally censor views they dislike. It is not hard to see why. Big Tech prominently deplatformed President Trump but continues to host several murderous dictators, including Vladimir Putin.

This online censorship is a serious threat to free speech. Major corporations should not get to decide who can speak online or what they can say. Unfortunately, federal law protects this censorship to some extent. Section 230 of the Communications Decency Act was passed to protect minors from obscenity online, but many courts have interpreted Section 230 to protect platforms from liability when they take down any content.

The best solution is to require Big Tech platforms to act as common carriers to receive Section 230 protections. Common carriers such as telephone companies must accept all customers without discrimination, and they cannot deny Americans service because they do not like their phone conversations. The courts have long held that common carrier requirements are compatible with the First Amendment.

However, under the current administration, the federal government seems unlikely to protect online free speech. The White House has openly admitted that it is asking social media platforms to remove what the administration deems “misinformation.”

In the absence of federal action, states can combat online censorship. The America First Policy Institute has developed model state legislation that would regulate major social media platforms as common carriers. The model legislation protects citizens from deplatforming and viewpoint-based discrimination, and it is designed to be consistent with the First Amendment and Section 230. States that want to act can prevent Big Tech from censoring their residents.