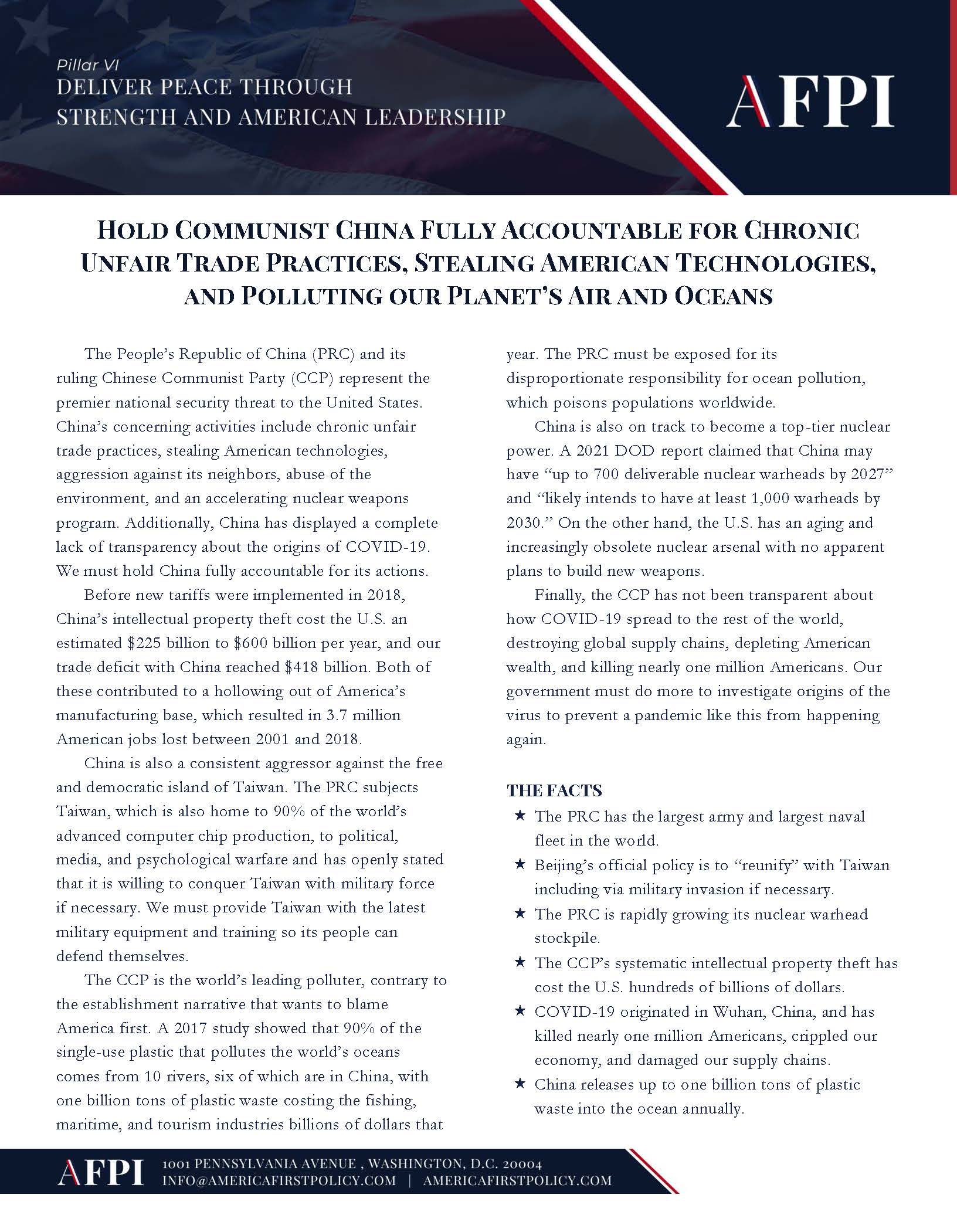 The People’s Republic of China (PRC) and its ruling Chinese Communist Party (CCP) represent the premier national security threat to the United States. China’s concerning activities include chronic unfair trade practices, stealing American technologies, aggression against its neighbors, abuse of the environment, and an accelerating nuclear weapons program. Additionally, China has displayed a complete lack of transparency about the origins of COVID-19. We must hold China fully accountable for its actions.

Before new tariffs were implemented in 2018, China’s intellectual property theft cost the U.S. an estimated $225 billion to $600 billion per year, and our trade deficit with China reached $418 billion. Both of these contributed to a hollowing out of America’s manufacturing base, which resulted in 3.7 million American jobs lost between 2001 and 2018.

China is also a consistent aggressor against the free and democratic island of Taiwan. The PRC subjects Taiwan, which is also home to 90% of the world’s advanced computer chip production, to political, media, and psychological warfare and has openly stated that it is willing to conquer Taiwan with military force if necessary. We must provide Taiwan with the latest military equipment and training so its people can defend themselves.

The CCP is the world’s leading polluter, contrary to the establishment narrative that wants to blame America first. A 2017 study showed that 90% of the single-use plastic that pollutes the world’s oceans comes from 10 rivers, six of which are in China, with one billion tons of plastic waste costing the fishing, maritime, and tourism industries billions of dollars that year. The PRC must be exposed for its disproportionate responsibility for ocean pollution, which poisons populations worldwide.

China is also on track to become a top-tier nuclear power. A 2021 DOD report claimed that China may have “up to 700 deliverable nuclear warheads by 2027” and “likely intends to have at least 1,000 warheads by 2030.” On the other hand, the U.S. has an aging and increasingly obsolete nuclear arsenal with no apparent plans to build new weapons.

Finally, the CCP has not been transparent about how COVID-19 spread to the rest of the world, destroying global supply chains, depleting American wealth, and killing nearly one million Americans. Our government must do more to investigate origins of the virus to prevent a pandemic like this from happening again.

Back to the Future, the Chinese Lead the Re-Birth of Hypersonic Missiles by John Mills, Epoch Times (Oct. 2021).

Update to the IP Commission Report, National Bureau of Asian Research (May 2013).
Trade in Goods with China, U.S. Census Bureau.