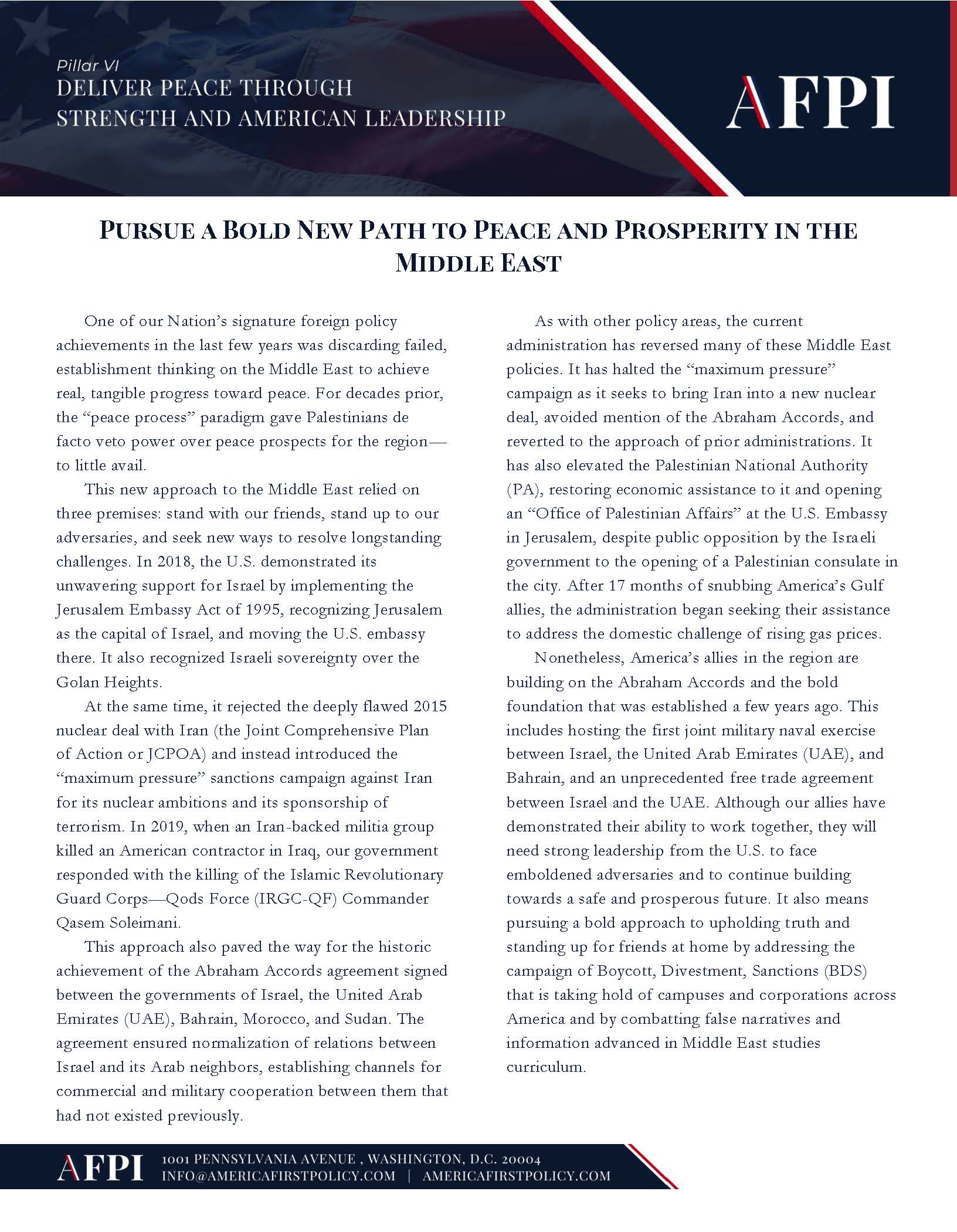 One of our Nation’s signature foreign policy achievements in the last few years was discarding failed, establishment thinking on the Middle East to achieve real, tangible progress toward peace. For decades prior, the “peace process” paradigm gave Palestinians de facto veto power over peace prospects for the region—to little avail.

This new approach to the Middle East relied on three premises: stand with our friends, stand up to our adversaries, and seek new ways to resolve longstanding challenges. In 2018, the U.S. demonstrated its unwavering support for Israel by implementing the Jerusalem Embassy Act of 1995, recognizing Jerusalem as the capital of Israel, and moving the U.S. embassy there. It also recognized Israeli sovereignty over the Golan Heights.

At the same time, it rejected the deeply flawed 2015 nuclear deal with Iran (the Joint Comprehensive Plan of Action or JCPOA) and instead introduced the “maximum pressure” sanctions campaign against Iran for its nuclear ambitions and its sponsorship of terrorism. In 2019, when an Iran-backed militia group killed an American contractor in Iraq, our government responded with the killing of the Islamic Revolutionary Guard Corps—Qods Force (IRGC-QF) Commander Qasem Soleimani.

This approach also paved the way for the historic achievement of the Abraham Accords agreement signed between the governments of Israel, the United Arab Emirates (UAE), Bahrain, Morocco, and Sudan. The agreement ensured normalization of relations between Israel and its Arab neighbors, establishing channels for commercial and military cooperation between them that had not existed previously.

As with other policy areas, the current administration has reversed many of these Middle East policies. It has halted the “maximum pressure” campaign as it seeks to bring Iran into a new nuclear deal, avoided mention of the Abraham Accords, and reverted to the approach of prior administrations. It has also elevated the Palestinian National Authority (PA), restoring economic assistance to it and opening an “Office of Palestinian Affairs” at the U.S. Embassy in Jerusalem, despite public opposition by the Israeli government to the opening of a Palestinian consulate in the city. After 17 months of snubbing America’s Gulf allies, the administration began seeking their assistance to address the domestic challenge of rising gas prices.

Nonetheless, America’s allies in the region are building on the Abraham Accords and the bold foundation that was established a few years ago. This includes hosting the first joint military naval exercise between Israel, the United Arab Emirates (UAE), and Bahrain, and an unprecedented free trade agreement between Israel and the UAE. Although our allies have demonstrated their ability to work together, they will need strong leadership from the U.S. to face emboldened adversaries and to continue building towards a safe and prosperous future. It also means pursuing a bold approach to upholding truth and standing up for friends at home by addressing the campaign of Boycott, Divestment, Sanctions (BDS) that is taking hold of campuses and corporations across America and by combatting false narratives and information advanced in Middle East studies curriculum.

Biden is surrendering to Iran by John Ratcliffe, Jerusalem Post (May 2021).

Peace to Prosperity: A Vision to Improve the Lives of the Palestinian and Israeli People, Trump White House Archives (Jan. 2020).